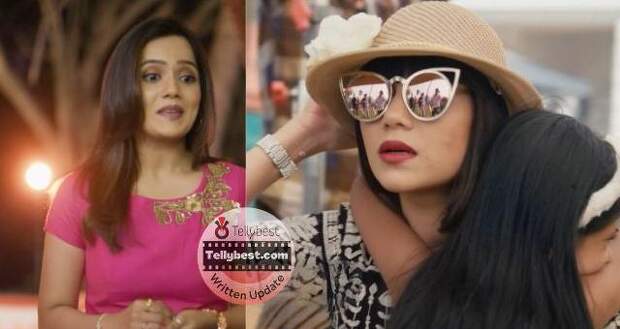 Today's Pandya Store 28th January 2023 episode starts with Chiku telling Suman that she is ill so she should not watch TV when the cover falls from the TV.

As Chiku stands in front of the TV, Suman sees a glimpse of the screen and yells at Chiku for breaking it as now she will not be able to play video games in it.

At the same time, Shesh announces that he is not the one who threw marbles at it and broke it.

Rishita takes Shesh’s side and scolds Chiku but Dev whispers to her ear that she should know this is done by her son only.

Meanwhile, Chiku calls Suman “grandmother” but Suman orders him not to call her this again.

Chiku then questions Suman if he should call her Suman and Dhara scolds him for this but Chiku asks if she should call Suman “Dadaji” since she has a problem with him calling her “Grandma”.

Just then, Gautam asks Chiku about the TV to which Chiku replies that he requested the boys not to play in Suman’s room.

On the other hand, Shweta is sitting on a sofa in a shooting set when a little girl named Natasha hugs her but Shweta scolds her for being touchy in the public.

Natasha then throws tantrum by saying that she wants to break another TV but the director announces that the shot is done so they don’t want to arrange another TV.

Hearing this, Shweta scolds the producer, Aman, for being cheap because if Natasha wants she will get a TV.

Back in Pandya Nivas, while Chiku keeps repeating that Shesh put the marbles in Mithu’s hand and forced him to throw them at the TV, Suman announces that she is no one to him.

In the meantime, Raavi accuses Chiku of dragging Mithu, but Mithu reveals that Chiku is telling the truth, which makes Raavi lower her eyes in embarrassment.

Looking at Mithu and Shesh, Suman orders them to come close to her while Chiku urges them not to as "no one" (Suman) will beat them up.

However, Suman scolds social butterfly (Raavi) and Patrani (Rishita) for not teaching their sons any “father-mother” manners.

Chiku watches in surprise as Suman hugs Mihtu and Shesh without beating them causing everyone to smile.

Back to Natasha, Natasha fails to utter any lines properly and when the director asks her why she is doing this, Natasha announces that she is feeling really sleepy.

Meanwhile, noticing, Krish’s video on her phone, Shweta feels jealous as she realizes Krish is rich now and has a wife.

Back in Pandya Nivas, Chiku questions Suman if Ravi’s son and Rishita’s son are her grandchildren, then why he is not to which Suman does not give any answer and starts whimpering to avoid the topic.

Raavi blames Dhara for making Chiku mannerless but Shiva orders her to behave nicely with Dhara.

Back in Mumbai, Natasha refuses to act despite Aman’s continued persistence, and Shweta is about to take her home when Aman announces that he will stop the payment.

Shweta pleads with Natasha to do the shot but Natasha refuses to do it as she is feeling super sleepy and Shweta mumbles that Rishita's daughter is just like Rishita.

Later, Dhara feels sad for Chiku who just watches as Suman hugs all the Pandya brothers and happy tears drop from his eyes.

© Copyright tellybest.com, 2022, 2023. All Rights Reserved. Unauthorized use and/or duplication of any material from tellybest.com without written permission is strictly prohibited.
Cached Saved on: Sunday 29th of January 2023 12:00:50 AMCached Disp on: Wednesday 1st of February 2023 09:46:51 PM