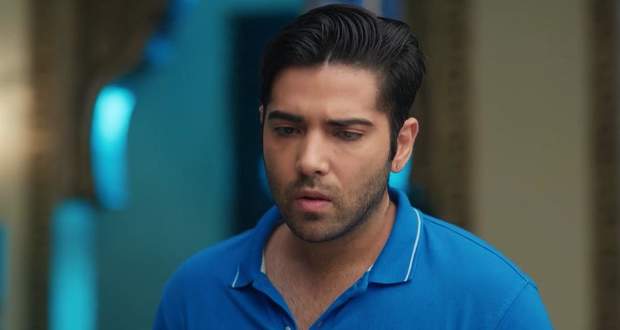 Today's Pandya Store 28th July 2022 episode starts with Raavi testing the water temperature and tells Shiva to wait until the water gets warm.

Shiva and Ravi fight with each other while the water cools to optimum temperature.

Just then, Dhara comes in and scolds Ravi for putting the child in the kitchen sink.

Meanwhile, Rishita tells Suman that the child should be returned to the hospital tomorrow as Dhara is getting too attached to it and it might hurt her in the long run.

After a while, Dhara comes with a baby and shows the baby to Suman while she asks Dhara to get some milk.

Just then Raavi brings a glass of milk for the babu and gets mocked for not bringing any spoon or bowl with it.

Suman asks Rishita to give one bottle to the child that she has purchased for her own would-be baby.

Afterwards, they all play with the baby until everyone gets tired and sleeps there.

Gombi comes to Dhara who is sleeping in a sitting position carrying the baby.

Gombi tells Dhara that the next day they will return the baby to the mother.

The next day Dhara and Gombi arrive at the hospital where Dhara tells Gombi that they should have kept the baby a little longer for his mother is ill.

Gombi tells her then it will be too late.

However, Dhara gets her to wish when the doctor tells them that baby’s mother is suffering from a rare disease and cannot look after the baby.

Gombi does not want to take the baby and insists on meeting his mother.

The baby’s mother tells them that she has no one in her family and gives them a chain for her baby asking them to take care of him and seizures.

Dhara tells Gombi that they cannot leave the child alone knowing his mother is too unwell.

In the meantime, Suman is waiting anxiously for Dhara and Gombi while Gombi comes to her with the others and tells her that they had to bring the child back because her mother is unwell.

Suman tells Gombi that they can have the child at home because of Dhara’s attachment to him.

Gombi requests Suman to find a way to keep Dhara away from the child.

Suman does not want to be a bad mother-in-law but agrees to it after realising the gravity of the situation.

© Copyright tellybest.com, 2022, 2023. All Rights Reserved. Unauthorized use and/or duplication of any material from tellybest.com without written permission is strictly prohibited.
Cached Saved on: Tuesday 22nd of November 2022 01:34:29 AMCached Disp on: Thursday 1st of December 2022 11:21:14 PM