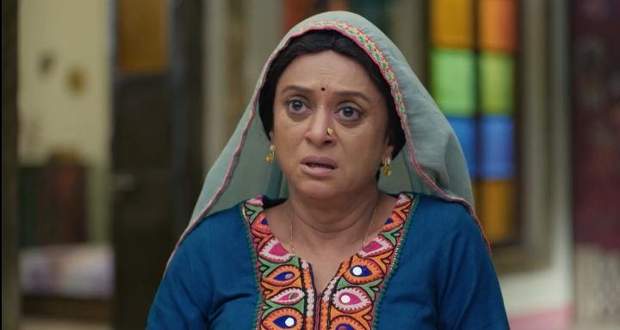 Today's Pandya Store 28th June 2022 episode starts with Shiva feeling to take revenge on Jeevan Lal as he took over his land.

On the other hand, Prafulla notices footprints near her bathroom and thinks they might be of Shiva.

Prafulla runs to Pandya house after getting scared at her house while Dhara helps Raavi to get ready for dinner.

Dhara takes Raavi along with her to Prafulla's house while Prafulla gets worried about Dhara's mental health.

On the other hand, Prafulla sleeps in Shiva's room while she gets scared of Shiva's shirt hanging on the wall.

Suman throws water on Prafulla to help her get out of her fear and asks if everything is fine now.

Meanwhile, Dhara drops off Raavi at Prafulla's house to unite her with Shiva.

Raavi calls out Shiva's name and says she believes that he is alive and meets her if he loves her too.

Shiva showers Raavi with flowers and appears in front of Raavi.

Raavi is unable to believe her eyes while Shiva calls her name while he touches her lips and kisses her cheek saying 'I love you'.

Ravi couldn't believe her eyes and felt like living in a dream and says 'I love you too' while she touches Shiva's face to confirm.

Shiva hugs Raavi and skips a beat from his heart.

Further, Shiva explains how he got injured in the accident and got saved by the fisherman.

Later, Shiva informs Raavi that he didn't sign any property papers and Jeevan Lal is a fraud.

Raavi feels happy as she will be meeting Shiva in hiding.

Later, Shiva drops of Raavi and hugs her while a neighbor notices Raavi and is shocked.