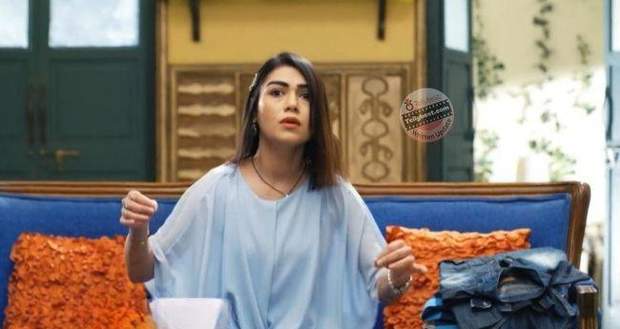 Rishita then orders Swetha to walk away and locks the door forcefully.

Meanwhile, Dhara arrives in her new rented home with Arnav, and Raavi calmly tells Arnav that Shiva thinks there is something more going on between her and Arnav so she should meet him in the office only.

When Arnav hears it, he suggests he clear Shiva’s misunderstanding about them but Raavi orders him not to do it.

Dhara who is also standing there urges Arnav to limit his and Raavi’s friendship to the office only.

On the other hand, angry Shiva again goes to the fighting club and after giving a bundle of notes, he orders the man to arrange two fighters who will beat him.

Hearing this, the man gets concerned as Shiva can die in the boxing ring but when he tells this to Shiva, Shiva announces that nothing will happen to him.

Entering the boxing ring, Shiva does not defend himself and accepts the beating while his mind keeps going back to Raavi’s abortion and Dhara meeting Arnav outside the Pandya house.

In the meantime, Krish is teaching scared Dhara how to control her breathing for a few seconds so Swetha does not doubt them.

Gomby arrives there when getting up, Dhara announces that she is not fit for this role, Gomby questions her if she does not want to save the Pandya family from Swetha’s bad intentions, and Dhara nods.

In the night, the Pandya family is waiting for Shiva while Swetha gives Suman a tiffin bag for her travel and Suman questions everyone if Patrani is still doing her campaign.

Rishita on the other hand opens the backdoor without anyone’s noticing.

Shiva then enters the house with bruises all over his face but when Gomby tries to talk to Shiva, Shiva murmur that nobody cares for him.

Shiva further adds that he feels suffocated in this house and Suman orders Gomby not to bring Dhara and Raavi home during their absence as soon as they get into the car.

Later, Rishita and Dev tell Swetha that they are going out for a dinner and walk away.

After Dev and Rishita walk away, Krish offers to take Swetha out for dinner but Swetha informs him that she wants to meet her parents.

Krish happily tells Swetha that she can go and as soon as Swetha walks away out of the sight, he switches off the light.

On one hand, Swetha emotionally manipulates her parents with crocodile tears against the Pandya family saying that nobody takes care of her there and Krish does not give any money; on the other hand, one thief enters the Pandya house while the other one waits outside.