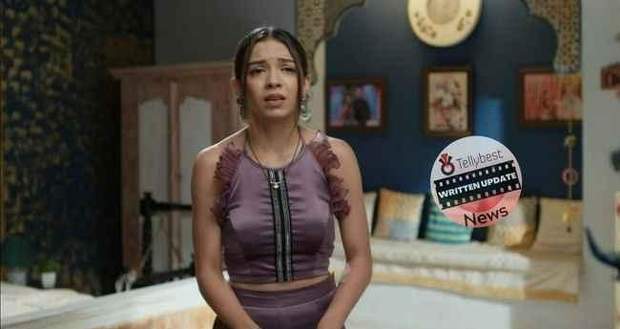 Today's Pandya Store 28th October 2022 episode starts with Shiva arguing with Raavi and telling her that what she did in the courtyard was not the right thing.

Raavi replies that their deeds were also not right and says that her one mistake is making everyone turn against her.

Shiva screams at Raavi and says that he is not willing to fight with her and leaves the room while Swetha enjoys the argument from outside.

Everyone gathers at the dining table for dinner and Swetha plans her next step to turn everyone against Raavi.

Swetha suggests to Suman that they should let Raavi contribute to her first kitchen duties by lighting diyas in the kitchen to please Maa Annapurna.

Suman seems pleased with the suggestion and calls Raavi asking her to light up diyas in the kitchen.

Raavi follows the instructions and puts diyas all around the kitchen while Shiva’s harsh words cloud her mind.

Swetha comes and tells Raavi why she placed the diyas like that as they can cause an accident.

However, Raavi gets upset over Swetha’s comment and leaves the kitchen without responding to her.

Swetha lights up a fire under the chimney and intentionally holds her clothes over the diyas while shouting for help.

Gautam, Shiva, Dev, and Dhara immediately rush to help Swetha and fill water from the tap to extinguish the fire.

Rishita sees the opportunity and messages Deven from Swetha’s phone to meet her in the kitchen at 10 PM.

Suman blames Raavi for placing the diyas like that in the kitchen and asks what they will do if something happens to Swetha.

After the others succeed in successfully extinguishing the fire, Swetha goes to change her clothes while Rishita sends Gautam, Dev, and Shiva away from the kitchen.

Rishita sets two cameras in the backyard and the kitchen and asks Swetha to bring in the food as the clock strikes 10 PM.

As Swetha enters the kitchen, Deven comes from behind and surprises her.

Meanwhile, Rishita is already projecting everything going on in the kitchen to the entire family.

Raavi says it is wrong to set a trap like that for anyone and tries to stop the projector but Suman stops her.

Deven reveals their plan of getting the jewelry of the Pandyas and him being Chikoo’s father which shocks everyone.

Dhara appears behind Deven and grabs him by his collar while Swetha looks at her in utter shock.

© Copyright tellybest.com, 2022, 2023. All Rights Reserved. Unauthorized use and/or duplication of any material from tellybest.com without written permission is strictly prohibited.
Cached Saved on: Monday 21st of November 2022 07:08:03 AMCached Disp on: Thursday 1st of December 2022 12:56:30 PM