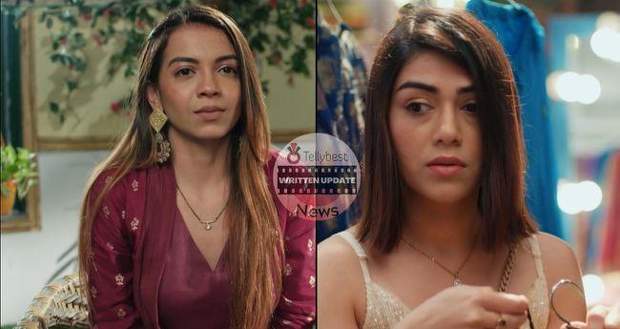 Today's Pandya Store 28th September 2022 episode starts with Shiva recalling his argument with Raavi and calls himself dumb for not listening to her.

Dev tells Shiva not to be lost in dreams and rather focus on work.

However, Shiva is unable to work properly after which Dev tells him to go out with Raavi and patch things up with her.

Meanwhile, Swetha calls Forum and tells her to meet at the backside of the Pandya house so that she can give her the money.

At the same time, Dev tries to convince Rishita to not meddle in Swetha's life anymore but Rishita gets angry and states that she will expose Swetha anyhow.

On the other hand, Swetha gets a call from her ex-boyfriend which traumatizes her when he sends her a video of Swetha looking like a poor person and stealing a phone from someone's house.

Swetha's parents worry wondering why Swetha lied to Rishita about not having any contact with Forum as they saw Swetha talking to Forum before the wedding.

Back at the Pandya house, Swetha's ex-boyfriend tells her to meet him at the Church with Chiku and threatens to give the video to the police if she doesn't comply.

On the other side of the city, Aarnav makes Raavi drive somewhere while Shiva sees them and tells the rickshaw driver to follow after them.

Arnav brings Raavi to a motel and drags her inside even though she is hesitant.

Raavi feels traumatized while Arnav brings Raavi to Chatur's room and she gets shocked to see the whole room filled with photoshopped pictures of many girls including Raavi.

Raavi realizes that Chatur is the hacker who hacked her social media and gets angry while Chatur manages to escape from there.

Aarnav and Raavi also jump out of the window and follow after him while calling the police that they have found the hacker.

Meanwhile, Shiva keeps banging on the door of the room where Raavi and Aarnav had gone.

Back at the Pandya house, Swetha gets worried as her ex-boyfriend keeps calling her while the rest of the Pandya family are still sitting together and talking.

© Copyright tellybest.com, 2022, 2023. All Rights Reserved. Unauthorized use and/or duplication of any material from tellybest.com without written permission is strictly prohibited.
Cached Saved on: Tuesday 22nd of November 2022 05:32:43 AMCached Disp on: Monday 5th of December 2022 12:20:02 AM