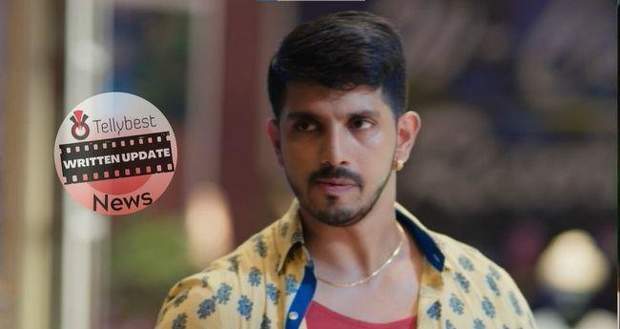 He gets panicked and asks the pedestrians if they have seen his wife Raavi or not.

He stops at a shop and shows Raavi’s picture to a woman, asking if she has seen her or not.

The woman immediately recognizes Raavi from social media and says Raavi does not stop appreciating Shiva as the best husband in the world to his fans.

Guilt strikes Shiva as he remembers how rudely he suspected Raavi of ignoring him.

Meanwhile, Chiku starts crying and Dhara takes him in her arms, saying her Raja Beta will drink milk now.

Rishita asks Dhara to leave some milk for Rani Beti too while Dhara replies she knows how to be a mother after raising three kids alone and one is only married to Rishita.

Rishita turns apologetic while Suman asks her to save some drama for another day.

Meanwhile, the only place Shiva hasn’t looked for Raavi is the hospital and he prays to Somnath that he finds her there.

Raavi’s eyes flutter open slowly while the doctor asks Shiva to take good care of her since she fainted due to a stressful situation.

When Raavi wakes up, she hits Shiva and says how come Shiva gives so much importance to his anger.

Shiva calls himself the stupid one for not reading the name of the hotel correctly.

He blames himself for Raavi’s condition but his Chipkali asks him not to beat himself up.

Romantic air blows by them and the two come closer.

Shiva kisses Raavi’s palm and utters 'I love you, Chipkali', while Raavi does the same.

The next day, Suman asks Raavi what happened to her last night & Raavi narrates how she fell after colliding with a truck.

Dhara asks Suman to buy a car for Raavi so she can go to her shoots safely.

Rishita turns cranky and says how come Dhara gives brilliant suggestions when it is Raavi’s turn.

Suman says she will not give anyone money.

However, Dhara says everyone will return Suman the money with interest.

Suman smiles and agrees to give three and a half lakhs to Rishita for starting her business and eight lakhs to Raavi for a car.

Suddenly, Swetha’s mother enters the Pandya House and states Swetha will only take care of Chiku.

However, she requests Suman to let Swetha stay for a month with Dhara so she can bond with Chiku easily.