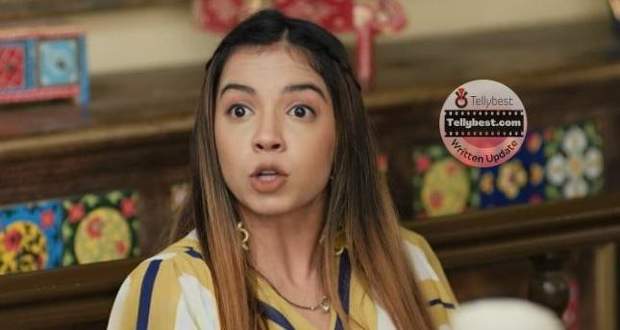 Arriving there just in time, Raavi yells at Shiva for not listening to her words and also adds that Dhara has rejected Jhankana’s offer.

Shiva stops hitting the sack when Raavi informs him that she is going to meet Arnav who may give her the job back.

Raavi further tells Shiva that she is unsure if she wants the job back or not and Shiva urges her to do whatever she wants, he will not stop her.

Meanwhile, inside the Pandya house, Dhara is serving breakfast in a very happy mood while calling everyone to come to the breakfast table early.

As soon as everyone takes their place, Dhara tells them about her plan of spreading a rumor about putting the Pandya house for sale as Shweta will surely jump to the offer to buy it.

When she tells them that she will forge Shweta’s signature just the same way she did, everyone refuses the idea.

Angry Rishita stands up from the table to yell at Dhara for planning to make them homeless in a rude voice and Dhara stands there in shock.

Gautam who has had enough of Rishita’s yelling scolds her for misbehaving with Dhara and even announces that he and Dhara are accepting their mistake but still Rishita does not miss any chance to taunt Dhara.

Gomby further reminds everyone that they were also present at the registry office but Shweta has over-smarted everyone.

When Gomby tells everyone that they need to solve the problem together, Dev takes Rishita’s side by saying that Rishita is just telling that Shweta is smart compared to them.

Dhara then questions everyone if they have listened to her properly causing Dev to close his mouth and announce that she just wants to spread the rumors about the Pandya store being on sale.

Raavi informs Dhara that Dhara will do everything in her power to make her plan sound logical so she is out of the plan.

Dhara angrily growls at Raavi for disrespecting Pandya’s store but Raavi reminds everyone that they need to do jobs to earn money.

Realizing her anger creates more problems in the family, Dhara calms down and tells everyone that they can take jobs if they want.

She further orders Raavi to make it clear if she and Gomby also need to find a job or not and Shiva tells Dhara that she does not need to think about it.

Dhara however reminds everyone that nowadays everyone has to say something against them so it will be better if they also start working.

While Shiva looks hurt, Raavi walks away as she needs to meet Arnav now.

Gautam then tells Dhara that he is going out to look for a job otherwise he will run out of patience and Krish questions everyone if the Pandya store is of no importance to all.

He then tells everyone that Shweta is desperate to go to Dubai so she will sell the store to anyone so they need to do something about it.

Hearing Krish, Dhara excitedly announces that she is also saying the same thing but Rishita threatens that if Dhara proceeds with this plan, she will walk away from the house.

On the other hand, a buyer reminds Shweta how she has taken the Pandya store from Gautam but he is still ready to pay price for it and Shweta orders him to leave.

At the same time, Gautam and Krish arrive there and Krish announces that he wants to buy the store.

© Copyright tellybest.com, 2022, 2023. All Rights Reserved. Unauthorized use and/or duplication of any material from tellybest.com without written permission is strictly prohibited.
Cached Saved on: Wednesday 25th of January 2023 09:51:29 AMCached Disp on: Monday 6th of February 2023 06:07:51 AM