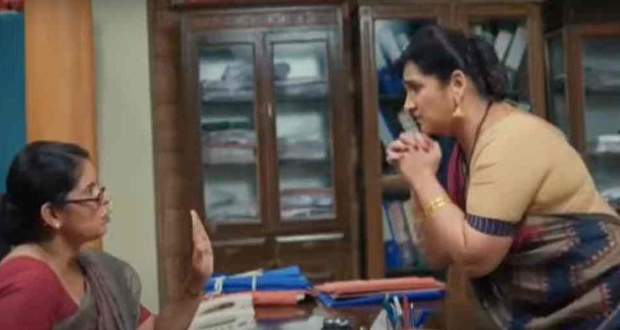 Today's Pandya Stores 29 Jan episode starts with Suman telling Raavi to prove herself that she can be a part of that family and not a toy of Prafulla.

Meanwhile, Dhara tries to convince Suman by saying not to talk about the past as she has no interest in the child now, and they can look forward to other happiness in the future.

Later, Anitha asks Prafulla what she is up to now as she has seen court papers in the cupboard but Prafulla refuses any of that.

Meanwhile, Raavi reaches Prafulla’s house and lashes out at Anitha for causing such a problem and tells her to apologize to Dhara.

Later, Anitha refuses all the blame and Prafulla comes to rescue Anitha.

Meanwhile, taking this opportunity she tells Raavi that the court has returned the complaint paper and she needs to sign it for them to accept back.

Meanwhile, back in Pandya House Rishita is heartbroken with Dev for not understanding her.

Later when Gautam asks what is bothering her, she mentions that when anything happens everyone brings Prafulla family into it which is not fair.

Gautam calms her down for all the misunderstanding.

Later Gautam asks Dev to ask for forgiveness from Rishitha and orders him to never bring Prafulla’s family to any of their matters.

Meanwhile, Dhara decides to give away all the toys to the orphanage.

Later, when Dev, Shiva, and Gautam start cooking, they manage to make a mess in the kitchen while they had decided to cook for the family.

Meanwhile, Prafulla hands over the court paper to Raavi and she manages to get it signed by Raavi without her cross-checking the paper.

Upcoming Pandya Store Updates: Shiva decides to get Raavi out of the Pandya house after seeing the divorce papers.