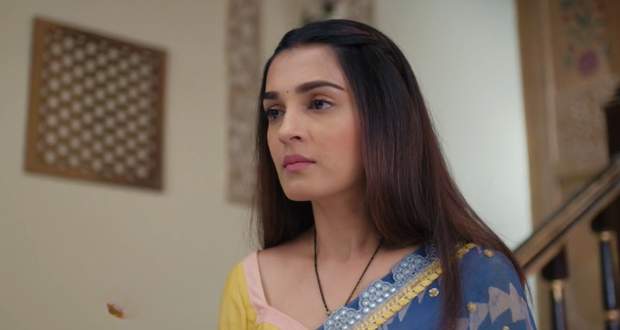 Today's Pandya Store 29th July 2022 episode starts with Gautam requesting Suman to do something about Dhara being too attached to the baby.

Suman reluctantly agrees while telling the whole family to support her when she speaks.

Later, Dhara is playing with the kid addressing him as Nand Laal while Suman comes there and takes the baby from her telling her to take care of the house instead.

Suman tells Dhara that Raavi and Rishita will take care of the baby while Dhara acts possessive and questions why she can't take care of both the house and the baby.

Raavi states that she will and Shiva will get practice and leaves from there with the baby while Dhara reluctantly goes to the kitchen.

Later, Raavi realizes that the child has wet his diaper and tries to change it with high difficulty.

At the same time, Gautam comes to meet Dhara and gets into argument with her while telling her that the family is worried that she is getting possessive of the baby.

Just then, they hear the baby's cry and Dhara rushes there as Shiva tries to make an excuse that they just got startled by the process of changing the diaper.

Dhara scolds both of them and announces that she will take care of the baby from now on.

Gautam tells Shiva and Raavi that they must help him and Raavi leaves for the market while Gautam goes to the hospital.

Later, Raavi sees a lady forcefully buying the bangles at a cheaper rate and posts it live on social media which makes the lady give the shopkeeper the whole amount.

At the hospital, Gautam is informed to deposit thirty thousand for the lady's operation.

Back at the Pandya house, Dhara scolds Rishita for bringing the baby downstairs without informing her while Suman makes her go check up on Krish.

Dhara goes reluctantly while Raavi returns from the market and shows the bangles along with bracelets for Suman.

Back in Krish's room, he is sulking while Dhara comes to his room and asks him to go out to cheer up his mood.

However, he reveals that he feels humiliated as Keerti has spread the news about their failed eloping and made him the laughing stock.

He runs out of the house while Dhara stands in the hallway and calls Keerti berating her which shocks the family members.