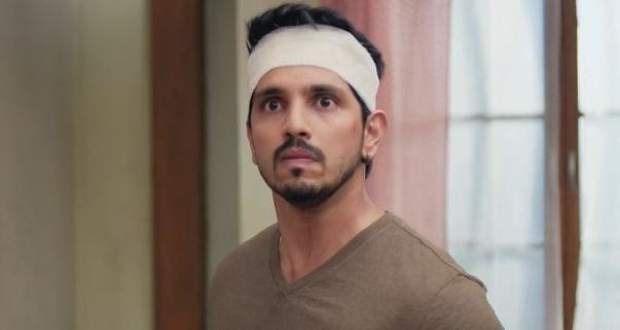 Today's Pandya Store 29th June 2022 episode starts with Raavi rushing to hug Shiva while Kanta sees her and runs away.

Kanta wonders who the boy was and runs after him but he escapes.

Meanwhile, Rishita questions Raavi for coming from outside while Dhara comes in time and saves Raavi from Rishita’s questions.

Rishita suspects that Raavi and Dhara are hiding something from her.

Later, Kanta comes to Shiva’s house to tell about seeing Raavi on the street.

Raavi feels trapped when Dhara once again saves her by telling Kanta that her eyesight is getting weak as Raavi was with her all the time.

Meanwhile, Prafulla feels scared thinking Shiva has taken the form of Raavi and refuses to sleep with her.

After a while, Suman finds Prafulla in her bed and tells her to get out while Prafulla stubbornly tells her that she will sleep with her tonight.

After a while, Gautam comes to Dhara to question her about her sudden happiness.

Gautam misunderstands Dhara’s answer and thinks her of being pregnant.

He wants to tell it to Suman but Dhara stops her saying let Shiva come and then they will tell her.

Gautam also says that, may her and Raavi’s prayers get answered and bring Shiva back.

In the meantime, Rishita is thinking about Raavi and Dhara’s conversation and tells Krish that she is sure that Dhara and Raavi are hiding something from her.

Meanwhile, Raavi comes into Prafulla's house and plays a practical joke on Shiva and later Raavi get romantic with Shiva.

After a while, Shiva tells Raavi that he cannot risk her coming to him again and again. He also tells her that first, he has to find a way to get the plot back from that fraudster.

The next morning, Raavi wakes up with a start thinking and hurries to leave Prafulla’s house.

On the other hand, Dhara brings tea for Suman and Prafulla and finds them gone along with Raavi.

Later Rishita tells her that Suman has taken Prafulla to her house.

On the way, Prafulla request Suman to not send her back to the house while Suman is adamant to send her back.

As Raavi spots Prafulla and Suman coming to the house she gets worried about escaping the house.