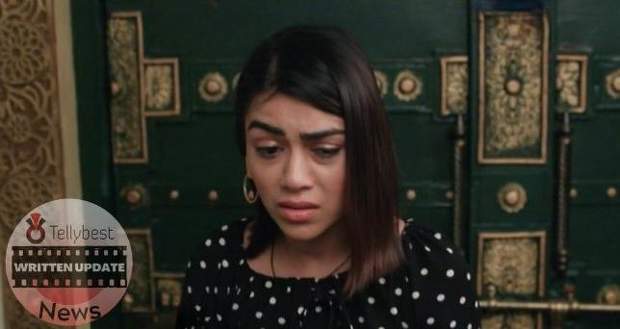 Today's Pandya Store 29th October 2022 episode starts with Suman along with other family members looking at the projector screen in shock.

While Deven is busy telling Shweta how she stole jewelry from her parents, Dhara arrives behind him.

She punches Deven in the face but Deven pushes Dhara hard.

Dhara hits her head on a nearby pillar and falls unconscious.

The whole family rushes to Dhara’s side to check on her and scared Shweta runs away from there.

He then takes Chiku from Raavi’s hands and orders everyone to move away from his track otherwise he will throw Chiku away.

While Krish is busy distracting Deven, Shiva approaches Deven from behind and pushes him away.

On one hand, Deven falls face flat on the floor, on the other hand, Krish catches Chiku in his arms.

The police arrive there at the same time and take Deven away.

Shweta falls near Suman’s feet and announces that she is innocent but angry Suman questions everyone why they did not send Shweta to the police along with Deven.

Dev however reminds Suman calmly that Shweta is their daughter-in-law so they cannot give her to the police as it will ruin their reputation.

Angry Suman screams that Shweta has ruined Krish’s life while Shweta is crying.

When Shweta tells Suman that she is innocent, Krish approaches them and informs Suman that he knew Shweta wanted to run away before marriage.

Suman and other family members look at Krish with wide eyes, and he clarifies that Shweta herself has told him about this last night.

He further adds that he assumed Shweta will change after she will adjust to the Pandya family.

Afterward, infuriated Suman grabs Shweta’s arm, and kicks her out.

Shweta questions Suman about where she will go now at this hour of the night but Suman screams that she has given Shweta and Chiku a roof over their head.

Suman further orders Krish to pack Shweta’s bags while Shweta is pleading with her to let her in.

Shweta even tries to cross the entrance and Krish arrives there at the same time with her bags.

Suman throws the bags away and orders Krish to fill out the divorce form the next day.

After Krish and Rishita lock the door in Shweta’s face, Shweta looks at the Pandya family from the window and blames Rishita and Dhara for it.

Later, Suman apologizes to Rishita for not trusting her beforehand, and Krish starts thinking about Dhara’s desperation to keep Chiku with her so he married Shweta.

On the other hand, while wandering on the streets, Shweta starts thinking about her mother’s words and now she has no place to go.

© Copyright tellybest.com, 2022, 2023. All Rights Reserved. Unauthorized use and/or duplication of any material from tellybest.com without written permission is strictly prohibited.
Cached Saved on: Monday 21st of November 2022 10:54:03 AMCached Disp on: Monday 5th of December 2022 12:43:09 AM