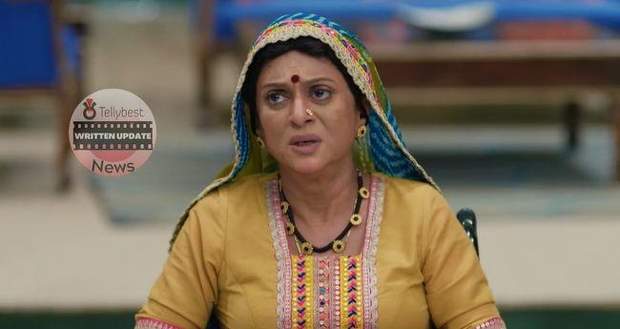 Today's Pandya Store 29th September 2022 episode starts with Swetha telling the Pandya family that they should go to sleep.

However, Dev says they will have to stay awake the whole night to come up with a plan to make Suman give money for the Navratri celebration.

Later, Swetha goes to the kitchen followed by Krish who tells her that he's glad Swetha is going to be a part of their plan.

However, Krish notices Raavi running after a man and stops him as Raavi starts thrashing Chatur.

Raavi cries angrily and slaps Chatur while asking the passers-by to make a video.

On the other hand, Shiva lies in a corner, recalling Raavi going with Arnav to the hotel room and drowning himself in misery.

Meanwhile, Raavi keeps beating up Chatur with the support of the Pandya family while Swetha gets a call from Forum who says that she is at the location to collect the money.

Swetha goes downstairs and wonders how to leave with Chiku with all the commotion happening.

Swetha notices Forum and messages her when she suddenly gets a call from her abusive ex.

He threatens her that she has till 11 PM to show up with Chiku at their decided place or else he will show up at the Pandya house.

Meanwhile, the police arrest Chatur while Shiva also arrives there.

Shiva questions Raavi, saying that he saw her and Arnav going to a cheap motel room, making Raavi shocked.

The passers-by start gossiping and talking ill about Raavi after hearing Shiva's statement while Dhara silences the gossipers.

Raavi asks Shiva if he was following her and tell him that it would've been helpful if he had also come inside the room.

The Pandya family supports Raavi against everyone else while Shiva feels guilty after realizing that Raavi had gone to catch the hacker.

Dhara scolds Shiva and says that he is very wrong to doubt Raavi.

On the other hand, Swetha messages Forum saying that she will meet in a while and goes back inside the house.

Later at night, Swetha and Chiku are about to leave but stop seeing Krish.

A happy Krish asks Swetha if she would like to go on a date while Swetha lies and makes up an excuse after which she goes out of the Pandya Nivas and waits for a taxi/auto.

© Copyright tellybest.com, 2022, 2023. All Rights Reserved. Unauthorized use and/or duplication of any material from tellybest.com without written permission is strictly prohibited.
Cached Saved on: Monday 21st of November 2022 07:19:28 PMCached Disp on: Wednesday 7th of December 2022 12:29:25 PM