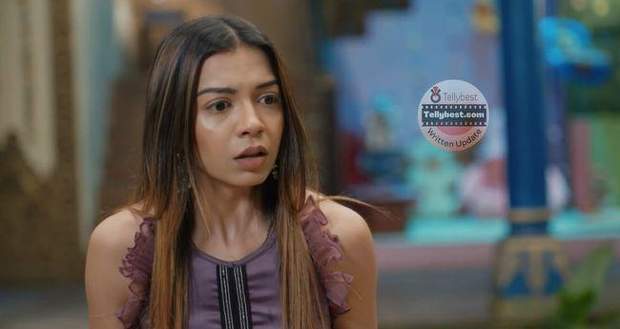 Suman is shocked to see the blood on the floor and she asks to be taken to Dhara immediately.

Gautam tells her that Dhara has been taken for post-mortem, and asks how come Suman is back so early.

Suman answers him in a sarcastic tone and tells him that she flew here.

Rishita butts in and asks how come Suman is back so early to that Suman tells them that the train got canceled.

So, Gautam drags him out and Krish and Dev intervene saying that they will handle Shiva.

Meanwhile, Raavi prays to god that the truth about Shweta comes out.

Outside the Pandya house, Dev and Krrish explain to Shiva their plan to him but anger bounded Shiva tells them that he won’t be a part of this and rushes inside.

Shweta wakes up and pleads that she did not kill Dhara and that the Pandya’s are framing her.

Suman goes to Shweta and slaps her stating that she took ‘Yashoda’ from Suman’s children.

Shiva is enraged and thinks about telling everyone that this is all fake but Dev convinces him to wait for some time.

At the same time, Gautam handcuffs Shweta and says that there is no need to plead in front of him whatever she has to say she should plead in court.

Suman is filled with grief and Shiva rolls his eyes seeing all this drama.

Seeing Suman in such a state, Rishita tells her that whatever happened it was because of Shweta and she will pay for her crimes.

Jhankana states that Shweta did it as a mistake as she would never do that.

Suman shouts at her and tells the inspector that she herself will give Shweta the hanging.

Shweta pleads but as she sees her pleads fail, she screams that she did not kill Dhara.

Enraged Shweta starts to spill her beans by saying that if she wanted to kill Dhara she would’ve done it in the hospital only.

She screams that they all want the truth so she will tell it herself and states that it would’ve been easier for her to kill Dhara at the hospital.

Rishita intervenes and tells that Shweta is saying rubbish and nothing else.

Shweta tells everyone the truth about her close friend Nitin and she could've plotted anything.

She further tells that just like she got Raavi to go to the hospital she could’ve done the same with Dhara.

Shweta scream even louder that her plan was to destroy the Pandya house to its last pieces and that she won all the way.

Krish tells everyone that she was the one who got the pregnancy kit.

Shweta tells that according to her plan Dhara and Raavi went to the hospital.

Rishita tells her that they all know about Shweta’s greed for Chiku’s custodianship but they didn’t know that she would murder Dhara for some money.

Krish further tells that he even heard her say that she would do anything for the money.

Shweta spills the truth about Raavi's surgery and tells that according to her plan Dhara was thrown out of the house.

She notices that all the people’s expression change as soon as she spoke and realizes what a huge mistake she made.

© Copyright tellybest.com, 2022, 2023. All Rights Reserved. Unauthorized use and/or duplication of any material from tellybest.com without written permission is strictly prohibited.
Cached Saved on: Wednesday 25th of January 2023 05:43:06 PMCached Disp on: Monday 6th of February 2023 06:14:23 AM