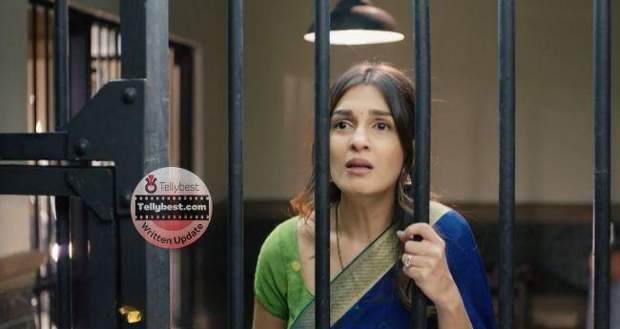 Today's Pandya Store 2nd January 2023 episode starts with Suman looking at her marriage photo with tears in her eyes.

When Dhara asks Suman if they irritated her very much, Suman tells her that they are just one step away from killing her.

Meanwhile, in the restaurant, Shweta is eating her food when she hears a baby crying and as she looks up, she finds a woman standing just like Dhara.

Thinking Dhara is here with Chiku to emotionally blackmail her, she walks towards the woman with a plate to hit but finds someone else instead of Dhara.

Shweta then sits to eat and gets emotional as she misses Chiku.

On the other hand, in Pandya’s house, the officer asks the Pandya family for Pandya brothers’ father’s death certificate causing Gautam to look upset.

Once the officer walks away, Gautam reveals to everyone that he has hidden the death certificate in the photo hanging in the store as Suman used to cry seeing that.

In the meantime, in the Pandya store, Krish arrives at the store to give Shweta her pizza and Shweta starts mocking Krish seeing him in this delivery boy dress.

However, when Shweta announces that she is feeling ashamed of being Krish’s wife, Krish replies that at least he is a hardworking person not like Shweta who only knows how to steal.

Meanwhile, in Pandya’s house, Dev gets a call from his office who orders him to join the job the next day if he wants it and Dev cuts the call.

He then screams in frustration that now Shweta will not let anyone enter the store to take it and even Rishita announces that if Shweta learns it then she will demand a part of the house.

While Dhara suggests Krish go talk to Shweta and come back with the photo, Rishita tells everyone that she can clearly see them losing the house too.

When Shiva tells everyone that they can steal the photo at night, everyone orders him to keep silent.

At the same time, Rishita calls Dhara’s plan stupid which makes Dhara fume in anger and she orders Rishita to find a better solution.

Back in the Pandya store, Shweta advises Krish to behave like a young adult but Krish tells her that at least he has not run away from his home and has not brought shame to his family causing Shweta to look at him with angry eyes.

Shweta even offers Krish extra money for the food who returns the extra money to Shweta since she loves money.

Krish even suggests to Shweta that he may have mixed poison in it which makes Shweta cough very hard and Krish gives her a water bottle.

In the meantime, in Pandya’s house, everyone continues arguing with each other and Dhara announces that only Krish can talk to Shweta.

When everyone argues, Shiva asks everyone if they have a better option which makes everyone silent.

On the other hand, Krish throws some dirt on Shweta’s store poster and he then gets a call from Dhara who orders him to bring their father’s photo.

After Shweta walks out of the store to throw the pizza out, Krish puts a snake on the portrait and he is about to take the photo away when the vendor comes to return his money.