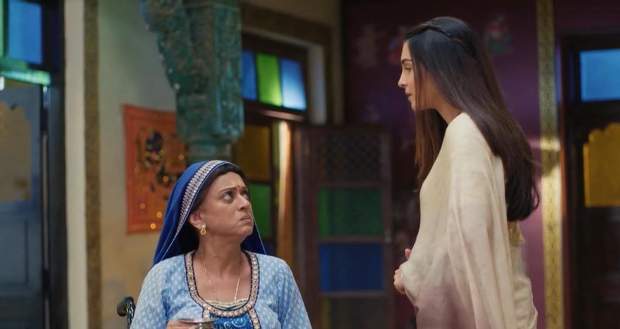 Today's Pandya Store 2nd July 2022 episode starts with Dhara telling everyone that she will sell this house soon.

Saying this, she walks away along with Raavi and Rishita.

On the other hand, while Jivanlal is searching for some papers, Shiva starts scaring him with his ghost attire.

However, he calms himself down and comes back with a candle.

Seeing this, Shiva runs away from there as he does not want to reveal his true identity.

Later while Shiva is sulking in his home, Dhara comes there and tells Shiva that she has decided to sell Pandya’s house.

As expected, Shiva tries to change Dhara’s mind but instead of listening, Dhara informs him about Rishita’s baby shower.

When Shiva asks Dhara if she will send him a Video recording but Dhara just smiles and walks away.

Later when Dhara returns home, Gautam pleads with her to tell him the truth.

Dhara denies it and asks Gautam to help her to sell the house.

Hearing this, Gautam announces that he will not let anyone sell his house.

On the other hand, while Rishita shows Dev flat designs, he angrily tells her that he will not let anyone sell his precious house.

After Dev walks away, Rishita tells herself that this is the only way to bring Shiva back.

The next morning, Dhara, Rishita, and Raavi lock themselves in a room and refuse to come out until everyone agrees to sell the house.

At the same time, Gautam informs someone on call that he will hand himself over to the police once Shiva returns.

Later while Suman with her sons sitting in the living room, Prafulla comes to check on her but Sudha scares her away.

Meanwhile, Dhara announces that they need to do drama and Raavi starts pretending as if her foot is broken.

Seeing Gautam, Dhara along with Rishita tells him to accept their wish.

Gautam denies it by telling them they cannot go against Suman.

At the same time, Shiva enters the home disguised as a grocery vendor.

Later, Gautam decides to make some fries for them so that they will come out.

At the same time, Prafulla notices Shiva disguised as a grocery vendor.

© Copyright tellybest.com, 2022, 2023. All Rights Reserved. Unauthorized use and/or duplication of any material from tellybest.com without written permission is strictly prohibited.
Cached Saved on: Monday 21st of November 2022 07:17:49 PMCached Disp on: Thursday 8th of December 2022 02:00:19 AM