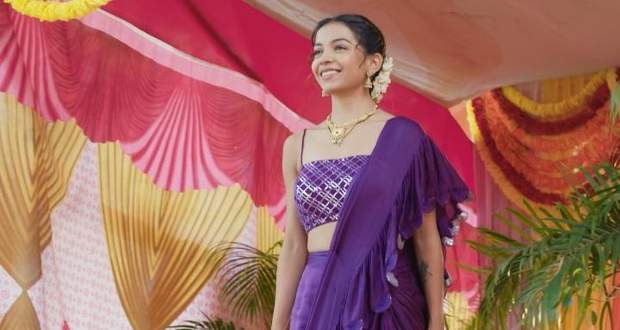 Today's Pandya Store 2nd June 2022 episode starts with Kamini accusing Dhara of trying to kill Rishita's baby again revealing that she gave the thread ball to Dhara who tied the thread to the floor and made her fall.

However, Dev shouts at her to stop while Dhara asks Rishita if she believes in her or not.

Rishita questions Kamini about how she knows that it was Dhara who tied the thread.

Shockingly, Kalyani comes forward and reveals to everyone that it was Kamini who planned everything to keep Dev and Rishita at Seth's house.

Further, Dhara comes forward and asks Kamini for the necklace infuriating her even more.

Kamini refuses to accept that it was her who stole the necklace while Dev and Gautam bring the thieves who reveal that Kamini intended to steal the necklace from Rishita's neck.

Still refusing to accept her mistake, Kamini says that they don't have any proof to prove their words while Kalyani comes forward once again and states that she saw her tying the thread to the chairs.

Feeling betrayed, Rishita says that she can't stay there anymore while Janardan comes there and begs her not to do so.

However, Rishita announces that she breaks all relations with the Seth family shocking everyone.

Before anyone can say anything, Rishita runs to Dhara and hugs her while Dev tells Janardan to not come in between them and the Pandya family anymore.

Further, Rishita and Dev hold the Pandya family's hand and turn towards the gates to leave.

Janardan once again stops them and gives them money for the work they did at his house but the Pandya family refuses to accept.

Later, Dev and Rishita are welcomed back into the Pandya house with a welcome pooja by Dhara.

Just then, they see Suman lying on the bed and rush to her asking how she got into that situation.

However, Suman picks up the tennis ball and throws it breaking the pebble tower as promised to Dhara.

© Copyright tellybest.com, 2020, 2021. All Rights Reserved. Unauthorized use and/or duplication of any material from tellybest.com without written permission is strictly prohibited.
Cached Saved on: Tuesday 2nd of August 2022 02:45:18 AMCached Disp on: Sunday 14th of August 2022 12:07:58 PM