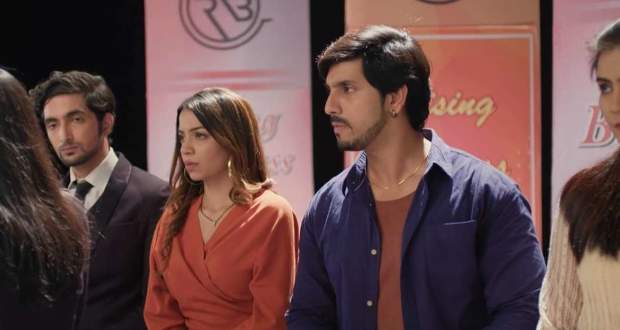 Shiva speaks about various features of the product, although pausing and stammering in between.

Later, the host asks everyone to join in half an hour.

Shiva avoids eye contact with Dhara and Raavi out of embarrassment but Dhara consoles and motivates him.

Dhara congratulates Rishita and wishes her luck however she walks away with a mere smile.

Rishita and Kirti have food with the Pandya family.

Later, the host calls some contestants forward, however, Shiva and Rishita are not called.

Both the Pandya family and the Seth family get anxious as Shiva and Rishita are not called.

To their surprise, the host announces that those contestants are eliminated.

Everyone rejoices with claps and cheers for both of them.

Rishita is overjoyed while Shiva is nervous.

The host announces that Rishita has the highest points in the first round.

Dhara and Raavi motivate Shiva for the next round, while Kirti blames them for being indifferent to Rishita and not being happy about her winning.

Raavi argues with her and Dhara stops her.

Dhara and Raavi hug and congratulate Rishita, who gets haughty about her success.

Later, at the Pandya house, Shiva feels embarrassed about being mocked by the people and decides to withdraw his name from the competition.

Gautham stops him and encourages him.

Raavi asks Shiva to speak in English in the next round to impress everyone which irritates him while the rest of the family starts smiling.

Suman encourages Shiva to perform and he agrees with her.

Meanwhile, Rishita is annoyed with Shiva as he is selected despite his poor performance.

Kamini comes to know about Dhara bringing food for Rishita as well.

She asks Rishita if Dhara was pretending to be good to her.

However, Rishita replies that she was happy as Dhara considered her a part of the family and adds that she felt bad about seeing Shiva upset.

The next morning, Dhara finds that Gautham is not well and she suggests that she will take him to the hospital.

Gautham tells Dhara that he is fine and asks her to go along with Shiva for his competition, but Dhara refuses.