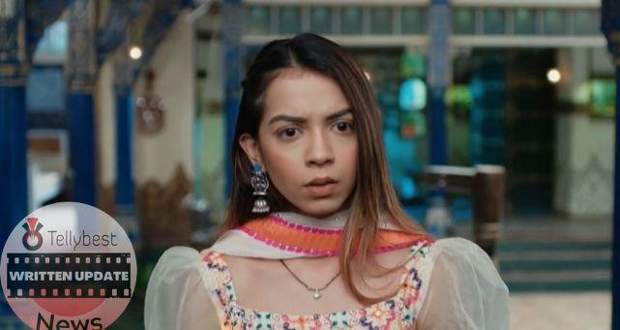 Today's Pandya Store 2nd November 2022 episode starts with Shweta telling Dhara that she wants to have a grand celebration as it's her and Chiku's first Diwali here.

While Rishita enters, Dhara tells Shweta that she can't go against Suman and Gautam's decision.

Reluctant to stop, Shweta asks Dhara to take some money from Chiku's fund to which Dhara firmly disagrees.

Shweta pursues her further and tells them she doesn't want Chiku to make compromises.

Dhara tells celebrating Diwali with family automatically makes it grand and they need not waste a lot of money on it.

Krish enters and joins Dhara on this. He tells Shweta that they used to celebrate Diwali before she came into this house and it used to be grand and special.

Shweta is adamant and doesn't stop dragging Chiku's fund into the conversation. She tells Dhara that she will call Jhankana and ask for her permission.

Shweta starts fake crying upon listening to Jhankana's voice and tells everyone how she misses celebrating Diwali without worrying about money.

Jhankana harshly replies to her daughter saying that celebrating Diwali with less money and some compromises shouldn't be that hard.

Harikishan speaks for Shweta and tells his wife to have some mercy but Jhankana cuts the call.

Dhara tells Shweta to not do such childlike acts, like calling her parents for money.

Krish agrees with her and tells Shweta to not blackmail anyone with Chiku's name.

Gautam and Dev enter the kitchen when Raavi is doing the dishes and Shweta follows them in.

Gautam stutters to tell Raavi about the Goa trip when Shiva appears.

Dev takes over from Gautam and tells Raavi that they are planning to go to Goa after Diwali and that she should try to get some days off from the office.

Shweta overhears this and plans on using it to her advantage.

Raavi tells them that she can't make it as she has to go to Mumbai with Arnav for training after Diwali which makes Shiva angry.

Annoyed by this, Raavi asks Gautam and Dev to take Shiva to Goa instead of her.

While dusting the house, Shweta is lost in thoughts and accidentally drops Shiva's marbles box.

While passing through Dhara sees this and asks Shweta to put all the marbles back in the box otherwise Shiva will get very angry.

While doing this, Shweta smirks and plans on destroying Pandya family further.

In the hall, Dhara brings money from Chiku's fund and gives it to Shweta for Diwali shopping.

Raavi enters and tells her that she wants to go shopping too.

Raavi tells Dhara that Arnav will be alone on Diwali this year and she wants to invite him over but doesn't want to fight with Shiva.

She gets teary telling Dhara how she feels when Shiva keeps fighting with her all the time.

Raavi tells Dhara that Arnav has helped her a lot and he's not just her boss but also a friend.

Shweta takes advantage and records this conversation on her phone.

Shweta and Raavi go shopping together.

Raavi buys gifts for everyone and when Shweta realizes that Raavi also bought a gift for Arnav, she decides to manipulate her.

Shweta tells Raavi that she should hide things from Shiva that trigger him, like buying a shirt for Arnav.

Raavi protests but Shweta uses her manipulative nature. She coaxes Raavi into agreeing with her.

Shweta lies to Raavi about wanting to go Diwali shopping with Jhankana and goes to a ticket booking agency.

She uses Chiku's money that Dhara gave her to book Goa tickets for Raavi and Shiva.

Shweta tells the person to deliver the ticket on Diwali at her house. Shweta smirks as slowly her plan is progressing.

© Copyright tellybest.com, 2022, 2023. All Rights Reserved. Unauthorized use and/or duplication of any material from tellybest.com without written permission is strictly prohibited.
Cached Saved on: Monday 21st of November 2022 07:06:40 AMCached Disp on: Friday 9th of December 2022 04:59:39 AM