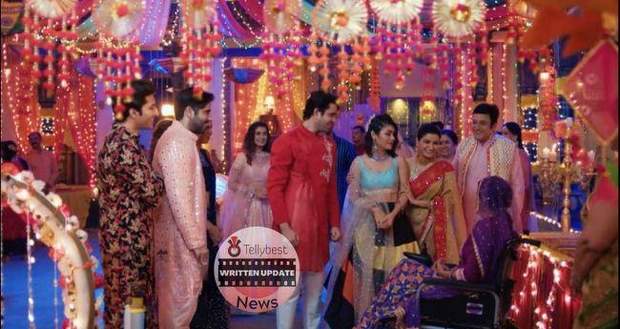 Today's Pandya Store 2nd October 2022 episode starts with Krish telling Swetha that he brought a dress for her to wear for the Dandiya night as he didn't know if she had anything to wear for the occasion or not.

They go in front of the mirror and check if the dress looks good on her when Swetha accidentally slips.

However, Krish holds her in time and manages to save her while her Dupatta falls on them making it a special moment.

Krish gets shy and leaves from there telling her to get ready.

Later, the Pandya family completes the pooja and starts the Dandiya night.

Krish holds Swetha's hand and helps her down the stairs as everyone starts dancing.

Shiva tries to talk to Raavi but she still ignores him while Krish stops Swetha and tells her that he has a gift for her.

Krish pulls out a pair of earrings and gives them to Swetha while helping her wear them which makes all the guests and the family members look at them adorably.

However, just before the engagement, Krish gets a call and he makes a statement that this engagement can not be done.

Swetha gets worried as Krish states that he has a surprise for her and goes out of the house.

Swetha turns towards the stairs while Krish returns with Deven who has a paper bag in his hands.

Everyone gets curious seeing the man with Krish while Swetha starts getting nervous.

Rishita sees Swetha's shocked expression and gets curious about Deven.

Swetha's parents ask Deven who he is and he tells everyone that he is Swetha's brother.

Rishita starts laughing thinking that it's a joke that parents do not know their son when Deven says that they don't know him.

Swetha clarifies that Deven is her friend, Neeta's brother, and starts mocking them.

Dev takes Rishita away and tells her to not make a scene all the time.

Meanwhile, Deven makes up a story telling them that he came back from Texas and went to her home in Ahmedabad but learned that she is getting married.

Further, he coincidently met Krish and reached her to surprise her.

Krish states that he was doubtful of Deven at first but believed him when he gave all the correct answers to his questions.

Further, to up his drama all the way more, Deven states that Neeta died due to an accident and that he brought a rakhi for her to tie around his wrist.

Swetha intentionally drops the rakhi and states that it can't be used now.

Afterward, the engagement ceremony starts and Deven takes the ring and eyes it while saying that it's beautiful.

However, Swetha snatches the ring from his hand and puts it on Krish's finger.

© Copyright tellybest.com, 2022, 2023. All Rights Reserved. Unauthorized use and/or duplication of any material from tellybest.com without written permission is strictly prohibited.
Cached Saved on: Monday 21st of November 2022 07:03:21 AMCached Disp on: Tuesday 29th of November 2022 12:16:01 AM