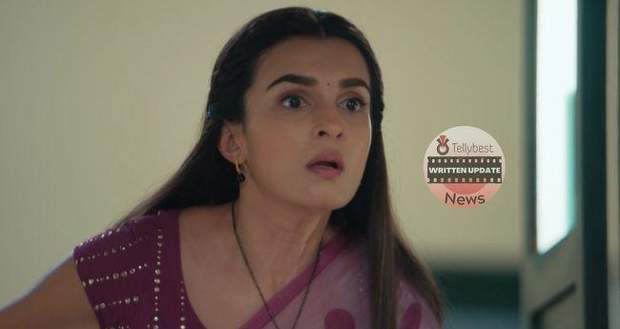 Raavi keeps getting calls from the car showroom while Rishita demands to complete the Kalash ceremony and tells the family to find it.

As it is getting late, Raavi requests Rishita that they should leave but Rishita snaps at her instead and tells her to help in finding the Kalash.

Seeing this, Suman tells Dhara to take Shiva and Raavi to bring the car but Raavi refuses to say that she wants the whole family to come together.

Swetha thinks that she will keep creating minor arguments in the house so that no one can focus on training her and she can leave Chiku with the family.

After some time, Swetha suggests Rishita check Chutki's bag while Rishita keeps saying that it can't be there.

However, Raavi checks it and the Kalash is found there which makes her bad in front of everybody.

Raavi accuses Rishita of doing this on purpose as the auspicious time is gone and nothing can be done about her car.

They both start arguing while Suman silences them and orders Rishita to complete her rituals so that they can go and get the car.

As the family does the inauguration of the car, Raavi worries about the Mahurat.

Suman tells her that all times are auspicious since she is going to bring a good thing and comfort her.

Swetha tries to create an argument by telling Raavi to sit in the front but the whole family agrees that it should be Suman sitting in the front.

All the ladies sit in the car while Gautam drives but Swetha is left outside.

She says that she will go home in a rickshaw but Suman tells Krish to take Swetha with him on his bike.

Later, on the way, Krish thanks Swetha for observing that the Kalash could be in the baby's bag and they converse the whole way home.

Afterward, Shiva tries to teach Raavi how to drive but she tells him that they should eat the chaat first and then learn.

They both start flirting and Raavi accidentally drops the chaat plate dirtying the car which makes both of them laugh.

On the other hand, Dhara makes the milk bottles for Chiku and Chutki while Swetha adds the lemon juice to Chutki's bottle to spoil it and create chaos.

© Copyright tellybest.com, 2020, 2021. All Rights Reserved. Unauthorized use and/or duplication of any material from tellybest.com without written permission is strictly prohibited.
Cached Saved on: Friday 30th of September 2022 09:30:47 PMCached Disp on: Saturday 1st of October 2022 05:31:17 PM