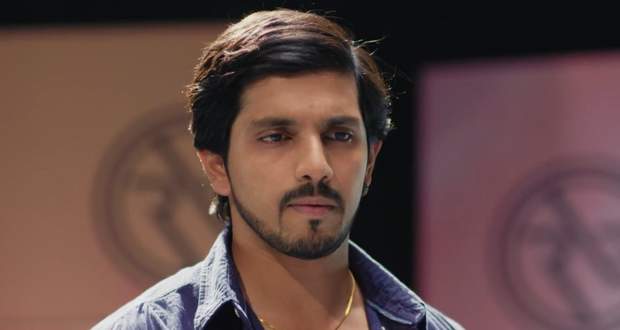 Shiva hesitates and he says that his product is a ladies' undergarment which makes the host, Rishita, and the others smile.

The host tells Shiva that it is a part of the competition while Shiva is greatly embarrassed.

The crowd mocks him for being timid.

Meanwhile, at the Pandya house, Janardhan makes fun of Shiva and cheers for him which annoys Suman and Gautham.

Raavi and Dhara get anxious, and Dhara tells that she should have been progressive and educated him about such matters.

The judges as well as the host ask Shiva to show the product in order to continue in the competition.

Shiva shows up his product with his hand shivering as he holds it and his head turned to the side refusing to look at it.

Shiva trembles as he shows his product while all laugh at him.

Later, the contestants are asked to perform and they start performing.

Rishita’s turn arrives, but she is clueless about her product while Dhara helps her.

Dhara shows her actions of sharpening the knife and Rishita understands the product.

She develops a concept and starts performing.

Rishita gives an excellent performance and receives a lot of applause.

The next comes Shiva’s turn and he comes to the stage feeling nervous.

He asks the judges if another product could be given to him but they state that he could either continue with his product or leave the competition.

The Pandya family and others at the Pandya house hope and pray that Shiva performs his task by overcoming his fear.

The host asks Shiva to perform and starts the countdown to start.

The Pandya family wants Shiva not to leave the competition in fear even though he sells the ladies' undergarments.

Shiva recalls all the problems of the Pandya family and the challenge that he had made.

He agrees to perform and everyone cheers him.

Shiva starts speaking but he refuses to take out the product and stammers as he speaks.

The host mocks him by asking questions and everyone laughs at Shiva.

Later, the box falls from his hands, and Shiva stand embarrassed holding the product in his hands.