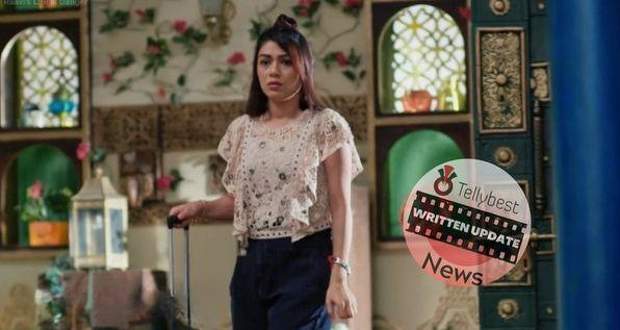 Today's Pandya Store 30th August 2022 episode starts with Swetha's mother requesting the Pandya family to let Swetha stay back so that Swetha and Yash can stay back to speak and bond together.

Meanwhile, Swetha recalls her mother warning her that she is either going to ship her off at Dhara's house or completely get cut off from the financial stability that they have for both Dhara and Yash.

Yash starts crying and Dhara rushes to hold her in her hands but stops before she can do anything.

Swetha cries for the baby to be taken aback but Dhara tells her that she cannot just put away her baby and tells her to keep it to herself.

Dhara tells Swetha to learn all these things and become a good parent for Yash while Dhara rushes to her room.

Suman feels proud of Dhara and tells Swetha's parents that she agrees with her plan.

Krish goes after her and gets emotional as he sees her trying to collect herself.

Meanwhile, Rishita tells Swetha to learn everything soon and return some food so that she can leave the Pandya family.

Swetha's parents leave as Swetha acts innocent in front of them while talking to her friend on the call and bad-mouthing Dhara.

On the other hand, Dhara is cleaning the room while Krish feels angry that Dhara has to bear everything.

Later, Swetha tries to comfort and calm a crying Yash when Raavi comes there with one of Dhara's things and puts it in Yash's hands calming him.

On the other hand, Rishita gets excited over her new online drama website and tells Dev that they should go look at the godown the next morning.

Dev gets tired of dealing with Rishita's tantrums and agrees to go for godown the other day.

Swetha sees Yash crying in her room and she starts pacing the room in frustration.

On the other hand, Dhara hears Yash crying and tries to distract herself from going to Swetha's room and putting Yash to sleep.

However, when Dhara decides to leave the room, she bumps into Suman and breaks down in front of her.