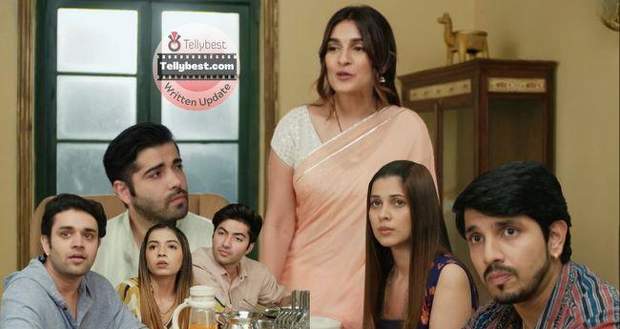 In a taunting way, Shweta tells Gautam that she will sell this shop for 10 lakhs to anyone but the Pandya family has to pay 1 cr to get their store back.

Hearing this Gautam gives Shweta an ultimatum that no one will buy this store from her and Shweta tells him that she will sell the store in 10 days.

She rudely stares at them and sends Gautam and Krish away.

In Arnav’s office, Arnav stares at his laptop screen which has Raavi’s photo on it.

Raavi enters the office and Arnav tells her that she can have her job back with an increased salary of 50 thousand per month and a D.A.D. additionally.

Hearing this Raavi gets happy and asks why is her salary getting increased and at the same time she sees the Pandya store sale pamphlet.

Angrily Raavi tells him that she doesn’t want sympathy and Aarnav butts in to say he is giving Raavi what she deserves.

Raavi extends her hand for a handshake and while taking it back she sees her photo on the laptop with the words I love you written on it.

Enraged Raavi tells him that now no matter what she will not work here and storms out.

In the Pandya house, Rishita stands up and tells all of them that if any of them has any self-respect left in them they should get jobs and move on.

Rishita storms out saying that Shweta is adamant about not selling the Pandya store to the Pandya family.

As she goes, Dev says that he agrees with Rishita.

In Suman’s room, Dhara tells Suman that she is scared and she has no hope.

Further, she says that this store is the only mode to keep the family together and it’s drifting further away.

To this Suman says that it is Dhara’s and Gautam’s responsibility, either they can give up and drift apart or stay strong and get the store back.

Later in Shiva’s room, Raavi calls him for dinner but he refuses.

Lethargically, Raavi tells him that no one is eating but that is wrong.

Shiva pulls Raavi’s hand in hope and asks her if she got the job and when is she starting from.

Like a scared little cat, Raavi tells Shiva to not be angry with her, and Shiva butts in and tells her that he knows that Arnav loves Raavi.

After that Raavi hugs him and says that he and this family is more important to her.

The next day, the Pandya brothers look for jobs, and Dev and Krish get the job, Shiva thinks to participate in a fighting match and Gautam gets no job.

In the Pandya house, Suman questions Dev if he is actually leaving, and Rishita butts in and tells the family that she is leaving with Dev and everyone asks where Shiva is.

Meanwhile, Shiva goes and fills out the match form.