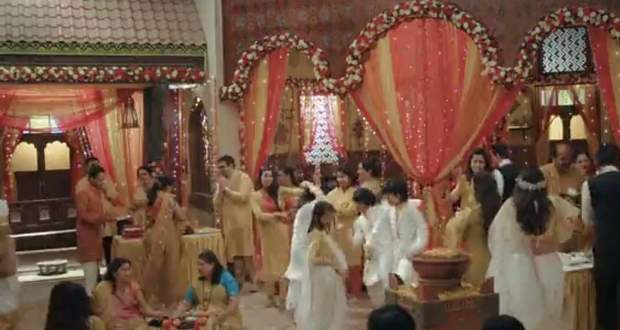 Today's Pandya Store 30 January 2021 episode starts with Gautam about to read papers of the shop while Hardik comes to call shiva.

Prafula says that she did everything from kite's drama to poison for Gautam's marriage approval. Once Haldi will be conducted, he can't refuse afterwards.
Suman gets scared to get the dream of Darshan's death due to shop mortgaged paper. It wakes up everyone and Shiva says mother might have got some ghost dream.
Gautam's brother gets scared while Gautam consoles him.
Haldi ceremony starts and Prafula brings a diamond set from the jewellery shop and tells Gautam to pay for it.
Gautam brings his mother to the ceremony while Prafula does not like her presence. Suman wishes Gautam to know the reality of Prafula's actual nature.
All guests arrive and Prafula tells Dhara to grind Haldi on stone. Gautam asks Dhara to take care of Shiva instead of grinding Haldi.
Dhara promises that she will be able to manage everything. Meanwhile, Haldi sticks to Gautam's hand. It angers Prafula and Anita's mother.
Haldi is applied to Anita and Gautam while everyone dances and celebrates Haldi's ceremony.

Upcoming Pandaya Store episode update: Gautam to tell Anita about the reality of the shop.