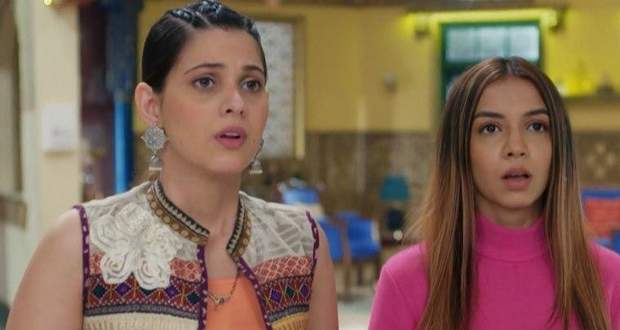 Today's Pandya Store 30th July 2022 episode starts with Dhara calling Kirti and scolding her for making a spectacle of Krish at the college and warning her to not do it ever again.

Rishita snatches Dhara’s phone and tells her to not talk to her sister in that tone. She also tells her that she is taking out her anger on Kirti because she has taken the baby without asking her permission.

Rishita also tells her that the baby belongs to everyone in the house and they can play with him anytime and is not Dhara’s property alone and she should not feel bad about it.

Meanwhile, Gombi comes to Suman and tells her that he needs to pay 30 thousand to the hospital for the baby’s mother's bill.

Suman gets annoyed but Gombi convinces her.

Meanwhile, Raavi is asked to make a promotional video for some business and is given 25 thousand rupees.

On the other hand, Kirti calls Rishita to complain about Dhara but Rishita scolds Kirti and tells her that she deserves what she got.

After a while, Raavi gives money to Shiva who jokes about her social media profile.

Raavi explains to Shiva how her making a promotional video for any business will make it popular and increase its customer base which will benefit the business.

Shiva thinks that she is taking advantage of the business and tells her to return the money.

On being told that the money is legitimate Shiva tells her that he is only with her till she is helping others and earning.

Shiva also wants them to take Dhara and Suman’s blessings while Raavi asks Shiva to not tell anyone anything.

On the other hand, Gombi is told that the baby’s mother is missing from the ICU and takes his money back telling them when there is no patient then there will be no money.

Meanwhile, Suman and Rishita are trying to appease the baby while Dhara looks at her longingly.

After a while, Raavi tells Shiva that Suman does not understand social media and is likely to get angry therefore let her business boom and then she will tell everyone.

Later, Shiva questions Raavi why is the family not being able to see her live videos despite them following her.

Raavi tells Shiva that she has blocked them from social media.

In the meantime, Dhara gets angry at Suman and Rishita for not letting her get close to the child while Gombi worries about Dhara and resolves to find an orphanage for the baby soon in light of his mother’s elopement.

© Copyright tellybest.com, 2022, 2023. All Rights Reserved. Unauthorized use and/or duplication of any material from tellybest.com without written permission is strictly prohibited.
Cached Saved on: Tuesday 22nd of November 2022 08:41:44 PMCached Disp on: Saturday 3rd of December 2022 01:39:03 PM