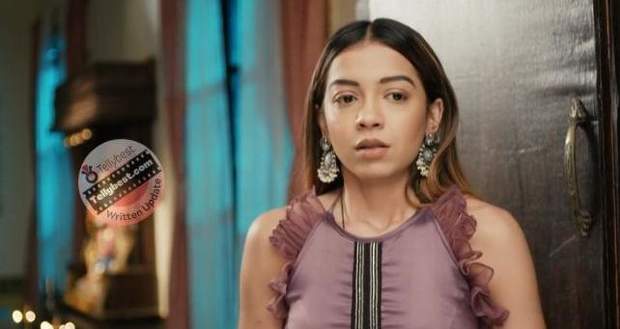 Outside the Pandya House, the Pandya brothers are amused to see Dhara’s acting and they decide to make Gautam an acting Policeman.

Inside the house, while Rishita wonders why this much blood is there on Dhara, Krish and Dev enter and see Dhara.

Krish asks Rishita how did this happen, she screams at him and tells him that he should ask Shweta about this.

Krish holds Shweta and screams at her about why she killed Dhara.

He says if she wanted the money Dhara would’ve given it to her but why did she go to the extent of killing her.

Shweta defends herself and tells everyone that she would never do anything like that.

Dev gets up and accuses Shweta as she holds the knife, Rishita tells him to call the police.

Meanwhile, Raavi worries about Dhara and tells Chiku that as soon as they prove Shweta is the reason for all misunderstanding she will be able to return to her house.

Dhara acts dead making all the rest of them think that something is definitely wrong.

Shweta tries to check Dhara’s heartbeat and to prevent this from happening Rishita calls the Police.

Shweta runs after Rishita trying to snatch away the phone, Shweta succeeds and says on the call that she is being framed.

Rishita snatches the phone away as she tries to hide the fact that she has called Gautam.

Meanwhile, in the hall, Krish apologizes to Dhara and tells her that she can breathe now but Dhara shows no response.

Dev tells Krish to lower his voice as Shweta might hear him, Krish tells Dhara to give any kind of signal as he is worried for her.

Shweta tells Rishita that she thinks that Rishita has called someone else and just named it a police call.

Rishita tells Shweta that if she hasn’t murdered Dhara then she shouldn’t be worried and then Gautam enters as a Police.

Gautam interrogates Rishita about the situation and the body, he goes to her body and checks her breathing and asks who saw the body first.

Both Dev and Krish point toward Shweta, Gautam questions her and takes custody of the knife.

Shweta pleads to him that she didn’t murder her, and says that they are framing her.

Krish asks her why would they frame her of all the people.

Both Rishita and Krish tell the officer that Shweta had ulterior motives.

Gautam further says that this much was expected and tells Shweta that she will get interrogated.