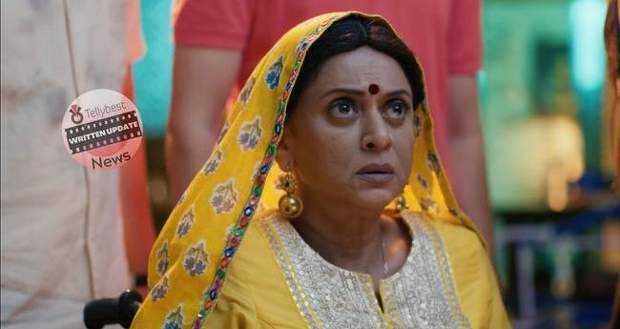 The stranger starts advancing towards her but she runs away from there.

Meanwhile, Gautam questions Dhara about why she did not tell him Shweta’s truth beforehand.

He further questions Dhara if she was going to perform a stunt, she should have told him.

Opening her eyes, Dhara tells Gautam weakly that she knows Gautam is always here to save her.

On the other hand, the strangers surround Shweta and start smiling creepily.

While Shweta looks terrified, some women arrive there and save her.

After the goons walk away, the woman questions Shweta if her home is near and Shweta nods.

Meanwhile, Dhara wakes up from her sleep and her head is filled with Shweta’s words.

Later, while Dhara is thinking about how Krish got hurt in this, Rishita arrives there.

Elsewhere, Krish is eating chips and feeling relieved as he does not need to fake his relationship with Shweta anymore.

He further tells himself that he is happy Chiku is with Dhara only.

Rishita then seats with Dhara and calmly tells her how she is the one who messaged Deven from Shweta’s phone.

Recalling Rishita’s excitement in setting up the projector, Dhara stands up furiously but Rishita yells from behind if she wants to bring Shweta home now.

Dhara turns towards Rishita and screams that now she has ruined Shweta’s chance of redemption.

She even announces that Shweta is not at fault here and that Rishita is the one who caused the chaos.

Rishita tries to make Dhara understand that she just wanted to bring Shweta’s truth in front of everyone but Dhara questions her if she thought that Shweta can take Chiku with her and how Dhara will live.

Dhara starts walking away from there and Rishita runs behind her.

On the other hand, Shweta shudders to recall her homeless days and how she used to beg people for food.

She then finds a stone nearby and hits her forehead with it.

While the blood is dripping from her forehead, Shweta tells herself that she will not let Pandya’s family live peacefully without her.

Later, Shweta arrives in Krish’s room by climbing through the window and urges him to let her stay there.

Shocked Krish orders Shweta to leave his room immediately but Shweta orders him to bring her son Chiku first.

When Krish reminds Shweta that she does not love Chiku and was planning to run away with him, angry Shweta screams that Chiku is her son so she can make him beg on the streets or do whatever with him.

She further yells that Krish and Dhara want Chiku only for his trust fund while Krish looks stunned.

On the other hand, Dhara sarcastically praises Rishita for proving herself right and Rishita guiltily adds that she did not thought about Chiku.

Meanwhile, Krish feels pity for Shweta and announces that only Dhara can change Suman’s mind.

© Copyright tellybest.com, 2022, 2023. All Rights Reserved. Unauthorized use and/or duplication of any material from tellybest.com without written permission is strictly prohibited.
Cached Saved on: Monday 21st of November 2022 03:14:13 PMCached Disp on: Tuesday 29th of November 2022 12:50:21 AM