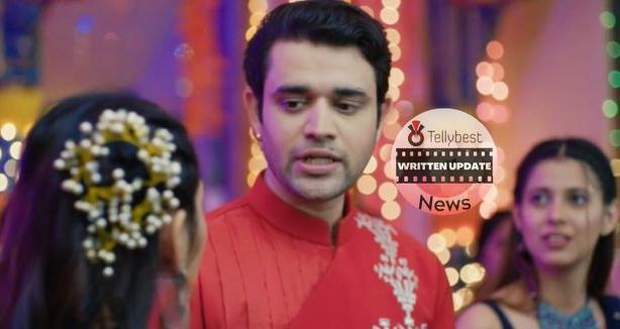 Dhara wakes up Gautam and drags him towards the window but they don't see anyone and Gautam tells Dhara that she has become obsessed with Chiku.

On the other hand, Swetha meets up with Forum and gives her the money after with they both separate and go their own way.

Meanwhile, Shiva apologizes to Raavi and tries to justify saying that she would have even done the same thing had it happened to him.

Raavi tells Shiva that she would've argued with him but would not have insulted him in front of the public.

Back in Gautam's room, he tries to comfort Dhara and starts getting romantic with her.

Shiva tries to explain himself to Raavi saying that he is just over possessive.

However, Raavi warns him that his possessiveness will ruin their loving relationship.

Shiva folds his hands in front of Raavi and begs her to not speak of such things as he cannot live without her.

Elsewhere, Swetha is about to climb into the rickshaw when a man comes out of it and corners her in between his arms.

Swetha starts getting anxious recalling how Deven used to beat her up.

She tells Deven that he should not have come here.

However, Deven tells her that he came here only for the money that she has and used to bring in for him.

Swetha keeps telling Deven to leave her and Chiku alone while he tells her that he knows she is getting married to some college kid.

Deven asks Swetha why her father wouldn't accept him but makes her marry a child named Krish.

Further, Swetha thinks to hide the fact that all the property is in name of Chiku and tells him that her father gave all the charity to the trusts.

Swetha tells him that she is being punished by having to marry into this family and tells him how she had to steal and beg to raise Chiku.

Deven threatens to give her video to the police while Swetha gives him the baby and tells him to take care of it.

On the other hand, Dhara goes around the house looking for Swetha and gets worried when she doesn't find her.

© Copyright tellybest.com, 2022, 2023. All Rights Reserved. Unauthorized use and/or duplication of any material from tellybest.com without written permission is strictly prohibited.
Cached Saved on: Monday 21st of November 2022 03:40:41 AMCached Disp on: Monday 5th of December 2022 12:38:44 AM