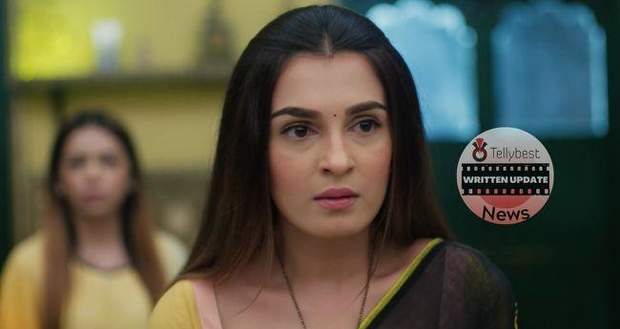 Today's Pandya Store 31st August 2022 episode starts with Suman telling Dhara to be strong and bid Swetha and Chiku goodbye when they decide to leave.

They both hug each other as they cry while Gautam sees them and thinks that it's better if Suman is consoling Dhara as he cannot see her crying.

Later, as the family waits for Shiva at the dinner table, Chiku starts crying.

Dhara composes herself to not go as Suman tells Swetha to go and take care of her child.

Just then, Shiva comes there with his arm in a cast which worries all the family members.

However, Shiva recalls the incident to them and the family gets emotional and feeds him realizing that Shiva got injured while trying to save Khan Chacha.

At night, Swetha gets annoyed by the sounds of the stray dogs and puts on earphones while thinking that she will freely escape from Chiku after a month.

Swetha marks the end of the month on a calendar while Krish sees it and gets angry.

On the other hand, Raavi hides the gift from Shiva when he comes inside the room and gives a gift to Raavi.

She teases him and further gives him the first she brought for him.

They both open their gifts and Shiva gets shocked to see the price tag of 10,000 Rs.

Raavi panics seeing the tag and makes up a fake story.

Afterward, Raavi opens her gift and gets excited about seeing a beautiful dupatta.

She goes to stand in front of the mirror as Shiva makes her wear accessories and compliments.

Raavi tells Shiva that this dupatta will be their symbol of love as he gives her a back hug.

Shiva further tells Raavi that she will have to give him her time also with the gifted watch and she smiles telling him that her everything is his.

They both say I love you to each other and spend the night together.

The next morning, Dhara is lost in her thoughts thinking about Chiku while Krish comes there and sees that the breakfast is burning.

Later, Raavi is giving a bath to Chiku when she tells Swetha to handle Chiku for some time.

As Swetha takes care of Chiku, she formulates a plan to make everyone realize that she can't raise Chiku and acts as if she's fainting with Chiku in her hands.

© Copyright tellybest.com, 2020, 2021. All Rights Reserved. Unauthorized use and/or duplication of any material from tellybest.com without written permission is strictly prohibited.
Cached Saved on: Saturday 1st of October 2022 11:13:20 PMCached Disp on: Wednesday 5th of October 2022 04:35:55 PM