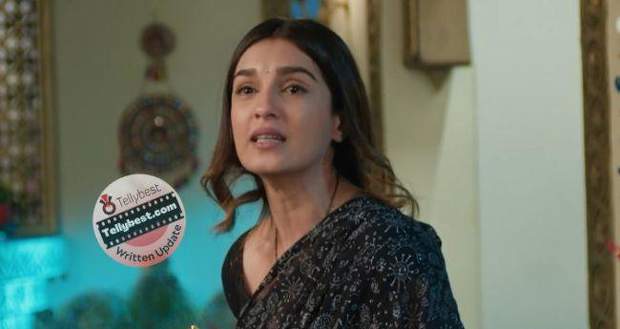 Today's Pandya Store 31st December 2022 episode starts with Shiva coming out of the boxing ring and taking the money from the receptionist.

When Shiva looks at the money with a faint smile, a man approaches him and offers to pay him 10k per match if he plays for him.

The man further tells Shiva that Shiva will work for him as a professional boxer who will fight five matches per month and even if Shiva fails to win, he would get 5k.

Meanwhile, in the Pandya house, Dhara expresses her worry to Gautam about the Pandya family breaking into pieces because of the Pandya store and Gautam looks at Dhara with hopeless eyes.

Later, in the hall, Dhara yells from the top of her heart and urges Dev, Rishita, Krish, Shiva, and Ravi not to go anywhere.

Hearing Dhara’s emotional pleading, Rishita orders Dev to not go outside as Dhara is doing this just to stop them from going to Ahemdabad whereas Raavi who is worried for Shiva whispers to herself that Dhara is doing emotional drama now.

Meanwhile, Dhara pleads with the Pandya family to come out into the hall and help her get the Pandya store back with her plan in a crying voice.

She even urges them to share their own good ideas if they have any other good plan, they should share it or they should go with her plan.

While Gautam orders Dhara to return to their room since no one is interested, the door opens and limping Shiva enters the house with several wounds.

Looking at Shiva’s situation, Dhara calls his name loudly and makes him sit on the swing.

Hearing Dhara calling Shiva’s name, everyone gathers in the hall and with a look of defeat, Shiva gives Dhara the 5k which has Shiva’s blood stains on it and Dhara looks at the money with tears in her eyes.

When Suman enters the hall, Dhara gives the money to her while saying that this is called earning with blood and sweat.

Noticing the blood, Suman remains silent while Dhara begs Shiva to give her one more chance as he is her ideal son.

Shiva however informs Dhara firmly that he does want to risk the last memory of their father.

Krish then orders Dhara to stop pleading with everyone since everyone has changed now but Dhara orders Shiva to promise her that he will not fight again.

In reply, Shiva informs everyone about his contract with the sponsor to fight professionally while Suman orders Shiva to come close to her.

When Shiva stands in front of Suman, Suman breaks down in tears as she does not want Shiva to do it again but Shiva refuses to promise.

Grabbing Shiva's shirt, Suman starts sobbing but Dev orders Dhara to get practical and even Rishita urges Dhara to let them sleep peacefully that last night they are here.

Hearing this, Dhara breaks down in tears and begs everyone to give her one chance while kneeling in front of them.

Seeing Dhara like this, one by one all the Pandya family promises Dhara to help her.