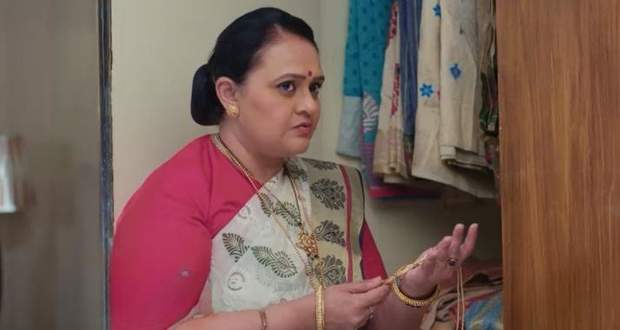 Today's Pandya Store 31st May 2022 episode starts with Raavi and Shiva romancing each other.

Later, Dhara calls the whole family to the hall and shows them the necklace that she had intended to gift Rishita in the past.

The family gets shocked when Dhara reveals that she stole it from Kamini's cupboard.

Dhara says that for her next plan, she needs two people who can act like thieves, and Shiva's friends agree.

Suman claps for Dhara with one hand while Dhara tells her to get ready to welcome Dev and Rishita.

Back at Seth's house, Kamini reveals to Kalyani that according to her plan, Rishita will fall on the holy thread brought by Dhara and will think that Dhara wants to harm her child.

However, Kalyani refuses the plan saying that she doesn't want to risk the baby and Kamini agrees with her while thinking in mind that she can do anything to stop Rishita from returning to Pandya's house.

Meanwhile, Dev forcefully feeds Rishita saying that she should not keep the fast as she's pregnant while the Pandya family enters the room and greets them.

Dhara gives both of them clothes as gifts after which she takes out the necklace and gifts it to Rishita.

Rishita gets hesitant and refuses but Raavi acts to take it from her which leads to Rishita immediately putting on the necklace and refusing to give it to her.

Dhara gets happy seeing Rishita and leaves with the family while Rishita says that she'll wear the saree and necklace that Dhara gave them.

Later, Kamini gives a ball of thread to Dhara and says that it's a ritual to tie it in the places where the girl roams to get rid of the evil eye.

However, Dhara thinks that it is Kamini's plan and hopes that Kamini gets exposed before that.

Dhara looks toward Shiva indicating to him that Kamini is planning something with the thread.

As the pooja is about to start, Shiva gets a call and he tells the caller to come inside once he gives them a signal.

Meanwhile, Rishita makes her entry but Kamini gets shocked to see the necklace on her neck and wonders how she got it.

© Copyright tellybest.com, 2020, 2021. All Rights Reserved. Unauthorized use and/or duplication of any material from tellybest.com without written permission is strictly prohibited.
Cached Saved on: Thursday 30th of June 2022 04:17:04 PM