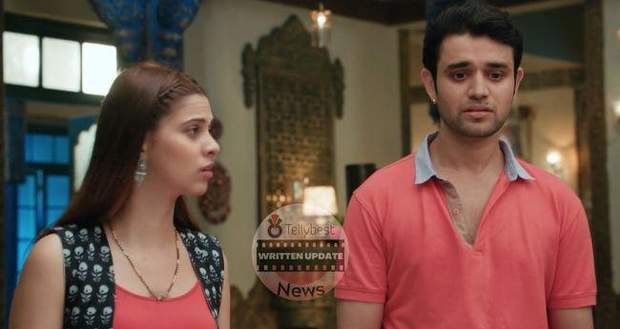 Today's Pandya Store 31st October 2022 episode starts with Shweta begging Krish to let her stay if he wants Chiku to stay with Dhara.

Krish then calmly replies that only Dhara can only talk to Suman and let her stay here.

He further clarifies that he will permit Shweta to stay in his room but he will never let her in his heart again.

Hearing his words, Shweta smirks and she thinks she just only wants three-time food and a roof otherwise she does not care about the marriage.

On the other hand, Dhara orders Rishita to pack Chiku’s bags as Shweta will arrive soon to take Chiku away.

Rishita declares that Suman has permitted Shweta and Krish’s divorce and Dhara can still adopt Chiku.

While Dhara looks at Rishita shocked, Shweta arrives there at the same time and yells that she just wants shelter.

Shweta then pleads with Dhara for forgiveness and falls near her feet.

Dhara orders Shweta to stand up and Shweta informs her that Shweta's parents have abandoned her and she was harassed on the streets.

Dhara calms Shweta down but informs Shweta that even though she was ready to give her one more chance, Rishita still does not trust her so Shweta needs to beg Rishita’s forgiveness.

Shweta turns towards Rishita and starts begging her to give her one more chance to prove herself.

Rishita however informs Shweta sternly that she just wanted to bring Shweta’s truth so now she does not care what Dhara and Pandya’s family decide to do with her.

She further adds that she still does not trust Shweta but if Shweta tries to harm her family then she will make Shweta pay.

After Rishita walks away, Dhara orders Shweta to leave for the night and she also walks away.

Shweta then viciously tells herself that she will make sure to break the bond between the four Pandya brothers.

The next morning, Shweta approaches Suman with tea but furious Suman throws the cup away.

Dhara then begs Suman to let Shweta stay for Krish as she thinks Krish has developed feelings for her.

On the other hand, Gautam calls a travel agent to know about the cost of the Goa trip as he wants to bring Raavi and Shiva close.

Meanwhile, Shiva finds Krish sitting alone outside the house and asks him if he wants to stay with Shweta, and Krish nods.

Elsewhere, Dhara falls near Suman’s feet and informs her that Deven was the one who blackmailed Shweta for it.

Even Rishita tells Suman that she planned to text Deven as she wanted to show Shweta’s true face to everyone.

Though Suman allows Shweta to stay, she makes it very clear that she will not tolerate Shweta’s one mistake.

She even reminds Dhara that Dhara will also leave with Shweta.

Shweta tries to touch Suman’s feet but Suman orders her to stay away as she has not forgiven her yet.

© Copyright tellybest.com, 2022, 2023. All Rights Reserved. Unauthorized use and/or duplication of any material from tellybest.com without written permission is strictly prohibited.
Cached Saved on: Monday 21st of November 2022 06:41:58 AMCached Disp on: Thursday 1st of December 2022 11:53:05 AM