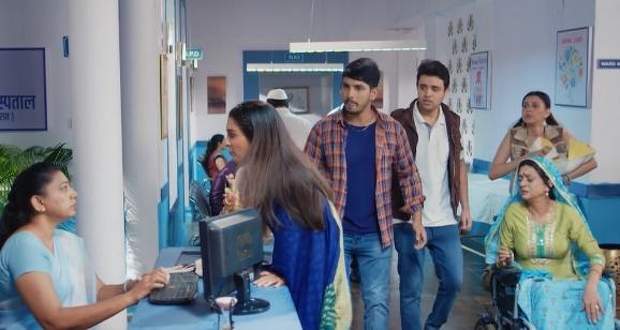 Today's Pandya Store 3rd August 2022 episode starts with Gombi telling Dhara about the hospital and that if the doctor and nurses recognise them then they will tell everything to Suman.

Dhara covers her face in with her Saari but Suman questions her for covering her face.

After a while, Gombi tries to take Suman away from the hospital but the doctor sees him and chases them and finally catches up with them.

The Doctor tells Gombi that she will only clear the case after he pays his past dues.

Rishita is shocked to hear that she is charging 30 thousand rupees for telling her that she has some gastric issues.

The doctor tells Rishita and Suman that the money is for Chiku's mother who has run away from the hospital and Gombi has run away with the money.

Suman hears all this and looks meaningfully at Gombi asking him about the money.

At home, Suman tells Gombi that he is trying to fool her.

She tells her that after asking her to keep Dhara away from the child and then goes and gives it back to Dhara.

Gombi tells Dhara that he does not want her to get attached to the baby.

Suman questions Gombi for lying to her for his wife and money and asks him what else has he lied about.

Gombi tells her that he has not lied to her only hides the truth and goes to get the money and returns it to her.

Suman takes the money and tells Gombi to give her five thousand rupees more as an interest for emotionally hurting her.

Afterwards, Suman scolds Shiva for bringing sweets and other things before the child’s actual arrival and tells them all that until all this gets finished no food will be cooked in the house except for her.

Later, Dhara takes a child from Raavi and locks herself in her room.

Meanwhile, Shiva tells Raavi to tell Suman everything else they will have a worse punishment than Gombi.

Raavi tells him that they will tell her tomorrow as today Suman is very angry and will not understand them.

After a while, Gombi comes home and carries Dhara to the terrace despite her refusal.

Dhara accuses Gombi of betrayal saying that he talks behind her back against her.

Gombi tells Dhara that for him she is everything whom he loves a lot and he has done everything to keep her healthy and away from stress but neither she nor Suman understands him.

© Copyright tellybest.com, 2022, 2023. All Rights Reserved. Unauthorized use and/or duplication of any material from tellybest.com without written permission is strictly prohibited.
Cached Saved on: Saturday 28th of January 2023 09:26:27 PMCached Disp on: Thursday 9th of February 2023 07:31:27 AM