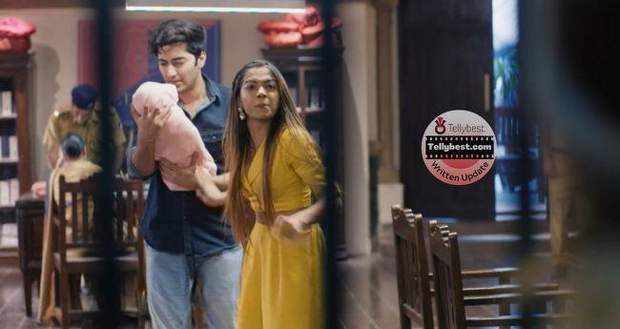 Today's Pandya Store 3rd January 2023 episode starts with everyone eagerly waiting for Krish while Dev mutters that god helps only those who can help themselves.

Hearing this, angry Dhara asks Dev why he did not go instead of Krish but Rishita taunts Dhara by saying that Dhara’s plans are always wonderful.

Rishita even orders Dev to close his mouth as no one listens to them in this house which causes Gautam to look at Rishita sternly.

Meanwhile, outside the Pandya store, Krish and Shweta both start tugging on the photo and Shweta accuses Krish of stealing whereas Krish informs her that he is just taking his father’s portrait.

During this, Shweta hits Krish on his arm, making him lose his grip on the photo, and Shweta decides to call the police.

While Shweta puts her phone to her ear, Krish takes it away to cut the call and he even informs Shweta that he is leaving.

On the other hand, in Pandya’s house, Rishita tells Dhara that she needs to start packing as she is stressed about the documents.

Dhara tries to stop Rishita from going but Raavi also takes Rishita’s side by announcing that her two meetings are lined up.

Raavi even informs Dhara that she really wants them to get the Pandya store back but it does not mean that they have to stop doing their work.

At the same time, Chutki starts crying and Rishita orders Dhara to feed her milk till she and Dev return home.

While Dhara is calming Chutki down, Chiku also starts crying and Gautam takes him to calm him.

After Gautam walks away with Chiku, Suman orders her to stay strong as the next storm is going to ruin everything.

Shiva acts calling someone to avoid talking to Dhara as soon as Suman walks away but Dhara advises Shiva to practice silence.

Meanwhile, in Pandya’s house, Dhara finds Krish entering the home with a defeated look, making her yell at Krish for failing.

She even tells Krish that everyone in the home says right about Krish being stupid but Krish informs Dhara that he has not told Shweta anything about the photo.

However, Dhara walks away with Chutki to the store after ordering Krish to keep this a secret.

Later, while Shweta is busy talking to someone on call, Dhara enters the store to take the photo away.

Thinking Shweta is busy, Dhara tries to sneak out with the photo with Chutki.

On the other hand, coming back home, Rishita and Dev ask Suman and Krish about Dhara and Chutki who remain silent.

Meanwhile, in the Pandya store, the police arrive there to take Dhara away while Shweta calls it a surprise and informs Dhara that she led Dhara to believe that she was busy.

When the police enter the store to take Dhara away, Shweta lies that everyone in the Pandya family tries to steal the picture.

However, the photo falls from Dhara’s hand and while everyone is busy talking, Dhara very smartly hides the certificate behind her saree pallu.

In the meantime, despite Dhara’s pleading, the police officer arrests Dhara but Dhara’s bloody feet create footprints on the floor.

Once the police drag Dhara out, Shweta mocks Dhara by ordering her to look at the footprints but Dhara again runs inside the store to create new footprints to make sure prosperity remains in the Pandya store.

While Shweta looks surprised, Dhara tells her that she will take this store back from her but Shweta just smirks.

After the police take Dhara and Chutki away, Dev and Rishita arrive at the store to question Shweta about Chutki but Shweta just smiles.

© Copyright tellybest.com, 2022, 2023. All Rights Reserved. Unauthorized use and/or duplication of any material from tellybest.com without written permission is strictly prohibited.
Cached Saved on: Wednesday 25th of January 2023 10:16:53 AMCached Disp on: Wednesday 1st of February 2023 05:41:01 PM