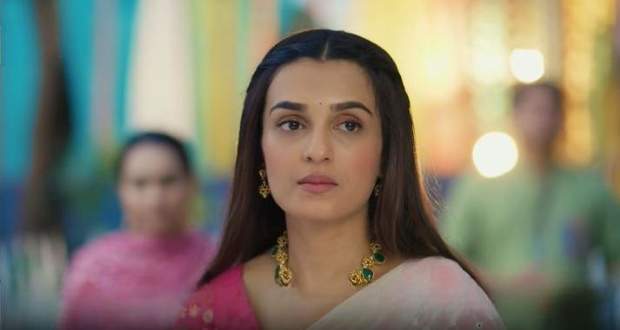 Today's Pandya Store 3rd June 2022 episode starts with Suman keeping her end of the deal with Dhara and throwing the ball which knocks out the pebble tower.

Dev asks the family how Suman ended up in a tower and Shiva reveals the whole truth to him.

Feeling guilty, both Dev and Rishita cry to Suman while Dhara tries to comfort them.

Suman calms Dev telling them that everything is fine as her whole family is complete again.

Dev brings the wheelchair and the family members help Suman get on it which makes Suman feel like her old self again.

Afterward, Suman makes Dev and Rishita promise to not leave the house again.

Rishita hugs Dhara who tells Rishita that her steps are truly auspicious for the Pandya family.

However, unknown to the family, Raavi feels hurt by the statement and again thinks about how Suman calls her inauspicious.

Further, Rishita apologizes to Dhara for all her misbehavior while Dev and Shiva also apologize to each other.

Krish comes there with a hammer and destroys the lock on Dev-Rishita's room.

At the same time, Dev locks Dhara-Gautam's room and tells them that they will renovate the room.

However, Dhara gets emotional and says that they can do it after they get some money as they are in a financial crisis at the moment.

Later, Dev surprises Gautam and Dhara by renovating their room by making homemade paints and taking help from Shiva, Krish, and Raavi.

The couple gets happy and emotional while a happy atmosphere surrounds the whole family.

The next morning, Suman's friends come over and praise Dhara and Rishita while Raavi reminds them that she is also a daughter-in-law of the family.

However, the ladies taunt Raavi saying that she is the cause of her parent's demise which dulls Raavi's mood.

Just then, Prafulla comes there with a gift for Raavi but Raavi takes the gift and leaves without greeting her.

Prafulla feels that something is wrong while Suman tells her to leave.

Later, Rishita requests Raavi to start the AC which stops working due to a malfunction.

© Copyright tellybest.com, 2020, 2021. All Rights Reserved. Unauthorized use and/or duplication of any material from tellybest.com without written permission is strictly prohibited.
Cached Saved on: Wednesday 3rd of August 2022 08:03:12 PMCached Disp on: Tuesday 16th of August 2022 04:03:34 AM