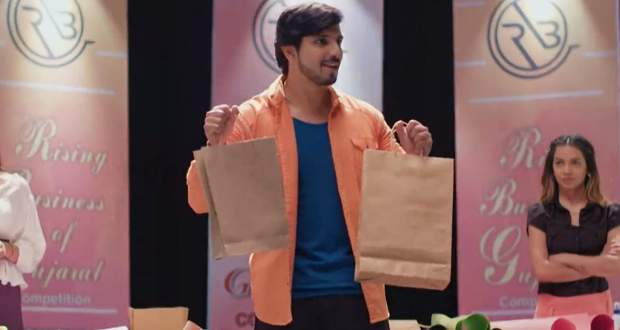 Today's Pandya Store 3rd May 2022 episode starts with Gautham sending Dhara along with Shiva for the competition, despite his bad health.

In the new round, the contestants are asked to make things creatively with chart papers.

Rishita gets her turn and shows everyone her product.

She had made a beautiful frame with flowers and a bouquet.

Rishita receives great applause as she talks about her product and later gives them to the judges.

Later, Shiva gets his turn and he had made paper bags, which impresses the judges.

He talks about the benefits of paper bags and receives great applause.

Later, the host announces the winner for that round as ‘Pandya’ at first which confuses both Shiva and Rishita.

She then calls Shiva’s name and the Pandya family gets overjoyed and starts clapping and dancing.

Meanwhile, Rishita stands confused and Janardhan and Kamini get furious.

The host declares that two Pandyas will compete with each other in the next round and says that only Shiva and Rishita are selected for the next round.

Raavi gives Shiva a tight hug and starts praising him out of excitement, while he asks her to calm down.

Dhara also congratulates him, while Rishita gets furious seeing it and challenges him to defeat Shiva in the next round.

Dhara asks Rishita to be happy for Shiva, as they were happy for her in the previous round.

However, Rishita argues with her and refuses to listen.

Rishita says that she would win the competition and prove to all that she is better than Shiva.

Later, at the Seth house, Rishita gets fierce and violent as she had lost to Shiva.

She shouts and throws things around the room and Kalyani and Kamini calm her.

Kamini asks Rishita to start thinking about how to win over Shiva in the next round than being aggressive.

She asks her to win by any means and suggests asking Krish about Shiva’s preparations.

Gautham is taken to the hospital and the doctor says that Gautham has symptoms of septic infection.