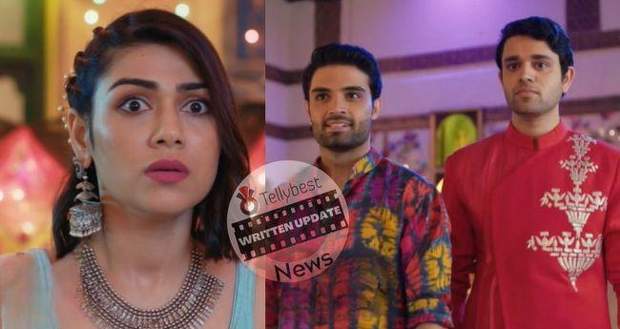 Today's Pandya Store 3rd October 2022 episode starts with Swetha and Krish taking blessings from the elders while Rishita notices the way Deven and Swetha look at each other.

Further, Deven forcefully feeds her sweet while she also takes a picture with Chiku and Krish stating that he is the father of Chiku.

Swetha goes to change Chiku's diaper while Deven goes after her when no one is looking.

Later, while the function is going on, a curtain catches fire and it spreads around the hall which Suman notices and notifies her sons about it.

The guests and family members rush out of the house as the Pandya brothers try to put out the fire.

Meanwhile, Deven threatens Swetha to arrange the money for him at any cost and she tells him that she can not do anything as Suman is always wary of the keys to the locker.

Raavi's dupatta catches on fire and Shiva saves her while she still ignores him and leaves from there.

While being in anger, Swetha tells Deven to go and steal the money himself while Deven takes it literally and tells her to bring him the keys and distract the rest of the family while he steals the money.

Dhara sees that Swetha and Chiku are missing and goes to look for her when she sees Swetha slap Deven across the face.

However, Deven sees Dhara and starts acting while signaling Swetha to play along.

Afterward, Dhara questions Swetha who says that she and Deven were just joking and leaves from there saying that she has changed Chiku's clothes.

Dhara sees that Chiku's clothes are not changed and thinks that Swetha is surely hiding something.

Later, Dhara gives a dance performance to distract the guests and the family while Suman sees Krish smiling and tells Gautam that she was wrong in judging Swetha.

However, Dhara keeps on looking at Swetha and can't help but be suspicious of her.

On the other hand, Shiva goes to the room and closes the door while apologizing to Raavi for his mistake.

When Raavi doesn't say anything, Shiva tells her that he won't let her go out of the house until she forgives him which angers Raavi even more.

Shiva angrily opens the door and tells her that he won't apologize in the future anymore while Raavi says that she is tired of fighting every other day.

Shiva looks into her eyes and tells her that if she doesn't like the way he loves her then he will not take any initiative and the relationship will proceed only when Raavi will do some effort.

© Copyright tellybest.com, 2022, 2023. All Rights Reserved. Unauthorized use and/or duplication of any material from tellybest.com without written permission is strictly prohibited.
Cached Saved on: Monday 21st of November 2022 06:09:52 PMCached Disp on: Saturday 10th of December 2022 03:01:05 PM