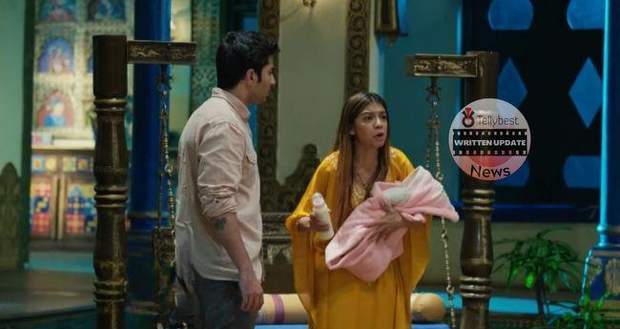 On the other hand, Raavi accidentally drops the chaat in the car and gets frustrated while Shiva tries to calm her.

Back inside the Pandya house, Dhara picks up Chutki from the crib to feed her but Rishita comes there and takes both the baby and the milk bottle from her.

However, Rishita notices that the milk is spoiled and creates a huge drama telling everyone that Dhara cares only about Chiku and not Chutki.

Dhara tries to stand up for herself but Rishita doesn't let her speak and accuses Dhara of being obsessed with Chiku while Dev tries to stop her.

However, Rishita doesn't stop and finally, Gautam stands up for Dhara and tells her to not speak utter nonsense against his wife as she has never been partial to anybody.

The remaining family members also stand up for Dhara and Suman finally tells Dev and Rishita to move out of the house if Rishita has so many problems with Dhara.

Rishita has a breakdown and breaks the bottle of milk and says that everyone is listening to her words but no one is wondering what would have happened if Chutki had drunk the spoilt milk.

Swetha starts crying and does drama saying that she and Chiku will stay on the road to prevent any more fights in the Pandya house because of them.

Rishita says that Swetha is doing drama but Dev tells her to shut up while Dhara goes and brings Swetha back inside the Pandya house.

Dhara tells Swetha that families fight and Swetha starts her drama once again.

Rishita gives Swetha the nickname Drama Queen and runs inside her room while Suman tells Dev to get his wife treated.

Dhara says that she thinks Rishita has post-pregnancy depression.

Later, Dev talks to Rishita who shows remorse for shouting at Dhara and states that she is sure her gut feeling about Swetha is very correct.

On the other hand, Swetha acts nice and takes care of Chiku while Suman comes there and tells her to give the crying Chiku to Dhara for the night.

Swetha feels apologetic to Chiku but says it's okay he also wants to be with Dhara more.

At the same time, Chutki also wakes up and Dev tries to calm her down while Rishita tells him that she needs to sleep.

The next morning, Raavi feeds Shiva breakfast and flirts with him while she tells him that she has lent her car to Rishita.

Just then, Rishita shouts for Raavi and scolds her for ruining the car and creating unwanted drama.