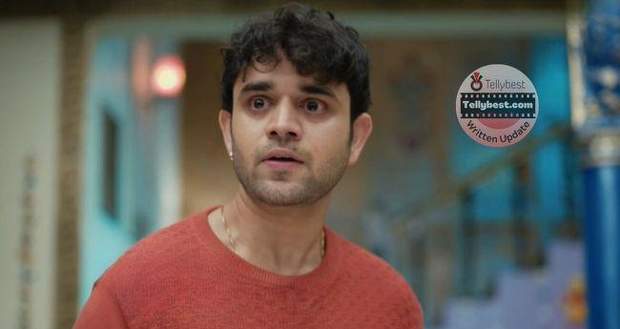 Krish then tells Swetha not to forget that Dhara is the one who saved her despite Swetha’s cunning plans.

Hearing this, Shiva mutters that they don’t have any more goodwill left but when he tries to call the police, Swetha snatches the phone away and breaks it.

She further picks up a stick with which she threatens to harm anyone who comes close to her.

Afterward, Swetha blames Jhankana for ruining her life by not making her understand that Deven is not good for her.

Swetha even announces that Jhankana and Harikishan have never taught her family values so she cannot accept Pandya family exists in this world.

Turning towards Krish, Swetha yells angrily that Krish is low-class compared to her whom she cannot love no matter how hard she tries while Krish just stands there glaring at Swetha.

Krish snaps after tolerating Swetha’s rude words for some time and reminds Swetha she took shelter in Pandya’s house again even after Suman threw her out.

Meanwhile, Swetha tells Jhankana that she gave her the greed of Chiku’s custody, and even Krish has married her for his own benefit.

Swetha then reveals that Kirsh has married her just to give Chiku to Dhara.

Hearing Swetha’s revelation, everyone looks shocked while Krish announces that Swetha does not love Chiku so he did what he thought was right.

Shiva who was standing near Swetha tries to strike her once again who orders Shiva to stay away otherwise she will beat him.

On the other hand, while recalling Krish’s words, Dhara questions Raavi when Krish has become this old as he has sacrificed his life for her.

When Dhara is talking to Raavi, Swetha accuses her of being blinded by Chiku’s love since she let her marry Krish even after knowing the truth.

Swetha further accuses Dhara of being greedy for Chiku and money but when Raavi questions Swetha why she did this to her, Swetha announces that everyone should suffer because of Dhara.

Later, when Swetha is still accusing Dhara, Gautam orders her to stop who in return screams she still needs to talk.

She then tells Dhara that if she still begs for forgiveness from her Dhara will let her and Chiku live here since she loves Chiku’s money very much.

However, Shweta also adds that she has made mistakes, but the Pandya family has pushed her to do it.

© Copyright tellybest.com, 2022, 2023. All Rights Reserved. Unauthorized use and/or duplication of any material from tellybest.com without written permission is strictly prohibited.
Cached Saved on: Wednesday 25th of January 2023 09:36:49 AMCached Disp on: Wednesday 1st of February 2023 07:02:35 PM