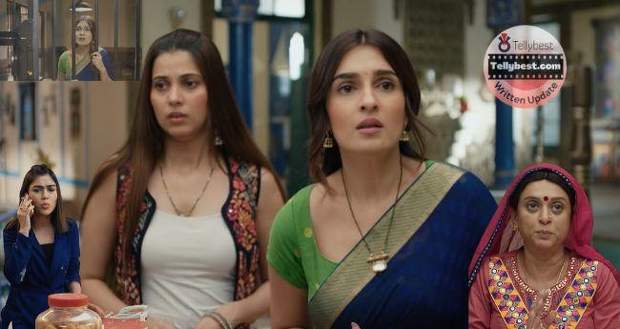 However, the police officer locks her behind the bars.

In the store, Dev finds a glass shard coated with blood and gets scared thinking that it might have hurt Dhara or Chutki.

Rishita gets angry when Shweta does not reveal Chutki’s whereabouts.

Seeing Shweta munching on her groundnuts, Rishita throws them out of the store, drenching her hair in salt.

Rishita and Dev beg Shweta to tell her Chutki’s whereabouts and fall on their knees.

However, Shweta smirks and walks to the refrigerator and picks out a can of soft drink and drinks it sassily.

Rishita runs to Shweta and grabs the can from her and splashes the drink on her head and face.

Shweta stands shocked while Rishita demands to know about her daughter’s whereabouts.

At the Police station, Dhara requests the police officers to call Rishita but she does not pick up the call.

Dhara cryingly calls out to Chutki and begs the police officer to give Chutki to her.

In the store, Shweta picks up the chilli powder jar and threatens to spray it on her if she will not tell her Chutki’s whereabouts.

Shweta gets scared and tells Dev and Rishita that Dhara trespassed on her property so she got her arrested.

They run to the police station while Shweta screams at them that Dhara does not care about anyone and she brought Chutki as a shield.

Shweta blames Dhara for putting Chutki at risk and fills Dev and Rishita’s mind that everything is Dhara’s fault.

In the police station, Rishita and Dev run inside and take Chutki from the woman constable.

Rishita blames Dhara for bringing Chutki with her to the Pandya Store and putting her life at risk.

They call Dhara greedy and accuse her of not bringing Chiku instead of Chutki if she wanted to bring a baby as a shield.

Dhara tries to defend herself but they don't hear anything and request the police officer to release them (Dhara and Chutki).

However, the police officer refuses to release them and states they will release them only when Shweta takes back her complaint.

Later, in the Pandya house, Dev enters and accuses Gautam of supporting Dhara in her wrongdoings.

Dev tells everyone about the events and Suman states that she will beg Shweta to take back her complaint.

However, Krish stops Gautam as Shweta will blackmail him like before but Dev argues with him.

Krish says he has one secret weapon against Shweta and Dev grabs his neck warning him to not make Shweta more agitated.

He walks out of the house and enters the shop furiously.

Krish orders Shweta to go with him and release Dhara from her accusation but she warns him instead.

© Copyright tellybest.com, 2022, 2023. All Rights Reserved. Unauthorized use and/or duplication of any material from tellybest.com without written permission is strictly prohibited.
Cached Saved on: Wednesday 25th of January 2023 09:36:01 AMCached Disp on: Wednesday 1st of February 2023 05:04:20 PM