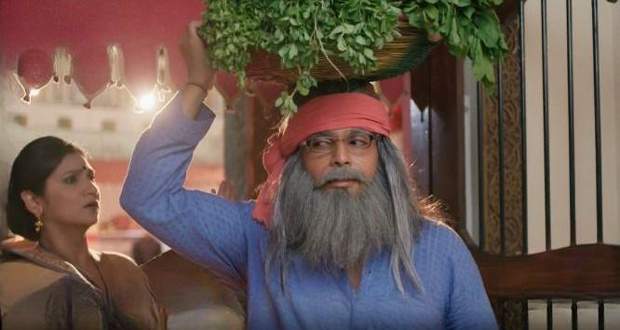 Today's Pandya Store 4th July 2022 episode starts with Dhara, Raavi, and Rishita discussing how they shall proceed in their hunger strike so that they can make Suman agree to their conditions.

Raavi asks Dhara why Gautam is so concerned about her health making Dhara hesitate in her speech but she tells them Gautam's misunderstanding that she is pregnant.

The three of them share a hug and wish that that news comes true soon.

Meanwhile, Gautam and Dev struggle to meet their ends in the kitchen as they want to prepare food for the three women in the household.

Suman asks Gautam to let her enter the kitchen and help them as they cannot finish everything on their own.

In the meantime, Prafulla spots Shiva disguised as a vegetable vendor and tries to look at his face from proximity.

Shiva hurries and takes off without stopping but Prafulla succeeds in seeing his face through binoculars.

At the same time, Suman remembers the date of Rishita's baby shower by looking at the calendar and plans to use it to break the unison of the ladies.

Dhara, Raavi, and Rishita spot Suman with the pandit and get to know that she is planning to celebrate Rishita's baby shower the next day.

Hearing this, Rishita gets excited and attempts to end their hunger strike as she does not want to spoil her special day.

As Rishita says that Dhara has forgotten about the completion of her seven months, Dhara shows her the reservations she has already made regarding her baby shower.

Raavi and Dhara somehow succeed in convincing Rishita as she declares to Suman that she does not need a baby shower.
On the other hand, Prafulla enters the house where Shiva is staying to check if he is present there.

Shiva hides and succeeds in keeping his presence unknown to Prafulla while she roams around the whole house.

Shiva decides that it is not safe for him to stay there and exits the house with his bag when he comes face to face with Prafulla.

On seeing Shiva, Prafulla begins to laugh with Shiva joining her in nervousness.

Meanwhile, Dev and Gautam try to lure the ladies with food but get rejected.

Seeing the situation, Suman declares that until the three of the women stop their hunger strike, she will also not eat her meals.

Raavi panics and tells Dhara and Rishita that they have to stop now as Suman has to take her medicines on time.

However, Dhara refuses to give in and says that she will use her streeastra against Suman.