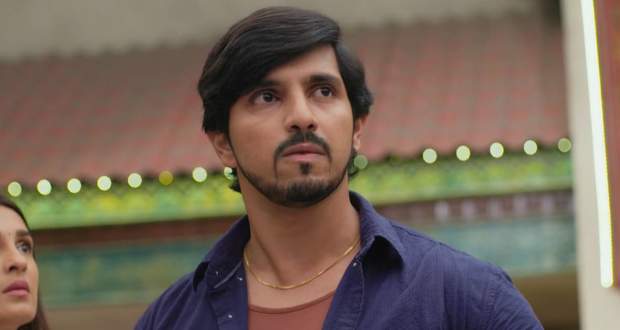 Today's Pandya Store 4th May 2022 episode starts with the doctor informing the Pandya family that they should have taken Gautham to the hospital when he was sick.

Dhara regrets neglecting Gautham when he was sick.

Dhara asks Krish not to inform Rishita about Gautham’s bad health as she feels that then Rishita would leave the competition being concerned for Gautham.

Meanwhile, Rishita gets concerned as she doesn’t find the Pandya family at the competition and begins to call but later she stops herself.

Janardhan comes to the Pandya house with drums and celebration.

He mocks the Pandya family saying that they have accepted their defeat when he doesn't find Gautham and Suman.

Suman comes in and informs him that Gautham is not well.

She mocks Janardhan saying that Rishita will win as Shiva wouldn’t leave Gautham and participate in the competition.

The doctor informs them that Gautham needs blood.

Shiva gives blood for Gautham, despite being stopped by Dhara who asks him to leave for the competition.

The family gets emotional and everyone starts crying as they see Gautham laying unconscious and Shiva laying beside him for giving blood.

The competition begins and Rishita is called to the stage by the host.

Rishita gives a presentation on her dream shopping mall and she gives an amazing performance.

Later, the host calls Shiva to the stage but Shiva is nowhere to be found.

The host states that in case of Shiva’s absence Rishita would be announced as the winner.

Hearing this, Rishita asks the host to wait for some time and she calls Kamini.

Rishita asks Kamini if she had done anything to stop Shiva in order to make her win the competition, while Kamini tells her that she hasn’t done anything wrong.

He asks Shiva to leave for the competition.

Gautham convinces him and Dhara and Krish also ask Shiva to leave.

Meanwhile, the host declares that Shiva has been disqualified, and right then a presentation starts.

A farmer, potter, and clothier come on stage and talk about their misery due to their income being surrendered to the middlemen.

The crowd asks for Shiva and Shiva comes in, to everyone’s surprise.

Everyone starts cheering for him.