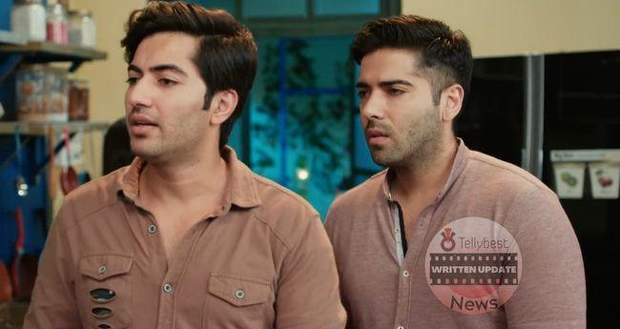 Today's Pandya Store 4th November 2022 episode starts with Suman scolding Dhara for wanting to be the best ‘Jethani’ or sister-in-law for the rest of ‘Bahus’ of the Pandya House.

She then eyes Gomby who is massaging her legs and tells Suman he wants to send Raavi & Shiva to Goa so they can spend some time alone.

Suman asks Gomby if their room is not enough for lovemaking and hurls her hand at Gomby while he runs away, scared.

The next morning, while arranging the sweets for Diwali, Swetha gets a flashback of her last Diwali in which she had to eat a piece of sweet crushed under someone's foot after Deven left her alone to fend for herself.

Krish asks Swetha to not dwell in the past while she wipes her tears.

Meanwhile, the men of the Pandya House fix the Diwali lights while the women draw Rangoli in a circle.

Dhara beckons Suman to look at Rishita whose face is a big O due to irritation.

Meanwhile, Krish daydreams about Swetha coming to him to fix the lights but he unconsciously puts it around Shiva's neck.

Dhara laughs while Suman sees lots of boxes coming into the house.

Dev says, pointing at Rishita that if she is going to be stubborn to spend a lot of money, Gomby will have to do it even when they have less money.

As Krish fixes lights outside, Gomby asks him if he wants to talk about Swetha to him or his other brothers.

Shiva tells Gomby that at the mention of Swetha's name, Krish's heart swells while he pretends to be unaffected.

Meanwhile, Dhara gifts gold bangles for Chutki to Rishita who hugs her.

Suman then asks Rishita not to ever threaten them by leaving home while Rishita nods excitedly.

Suman then asks Raavi jokingly whether her boss is giving her a Diwali bonus or not.

Swetha looks at Dhara and thinks since Rishita’s drama has ended, there is one more drama to deliver impetus to.

While arranging the flowers in another room, Swetha tells Dhara that Raavi & Shiva must go to Goa, otherwise, their relationship might break.

Dhara’s hand trembles and she drops the flower basket.

Meanwhile, Dev gifts a T-shirt with his & Chutki’s photo beside Rishita, promising her that they will also go to Goa.

Back to Dhara, Swetha suggests she take a loan from her till the time money comes from the Pandya Store.

However, Krish says they can wait for the money but Dhara is long gone into fear and asks Swetha to book the tickets for Raavi & Shiva.

Swetha internally says now she will send the screenshot to her mother, telling her to see how Chiku’s money is getting wasted.

© Copyright tellybest.com, 2022, 2023. All Rights Reserved. Unauthorized use and/or duplication of any material from tellybest.com without written permission is strictly prohibited.
Cached Saved on: Monday 21st of November 2022 07:05:31 AMCached Disp on: Monday 5th of December 2022 12:23:12 AM