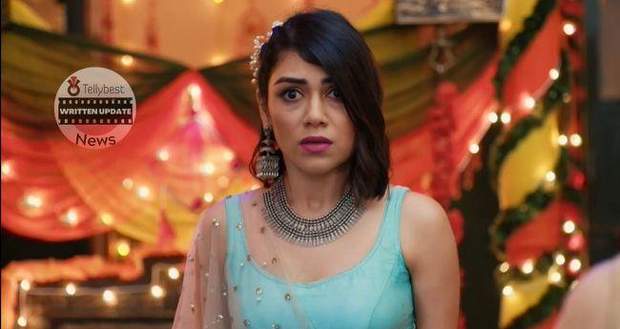 Today's Pandya Store 4th October 2022 episode starts with Shiva telling Raavi that he will not do anything in their relationship anymore as she will be the one to do anything from now on.

Further, both of them go to the hall where Krish and Swetha drag them towards the dance floor.

While everyone is distracted, Swetha steals the locker keys from Suman and gives them to Deven.

However, Deven sees that Swetha is coming after him and argues with him while she thinks that she has to get rid of the recording at any cost.

At the same time, Rishita sees that Deven and Swetha are missing and go to look for them.

Meanwhile, Swetha destroys Deven's phone and starts fighting with him while Rishita walks toward Suman's room.

Swetha sees Rishita and starts hitting Deven with the stick telling him that he cannot leave with the money.

However, he manages to hit Swetha on the head and runs out the window while Rishita only sees Swetha unconscious and alerts everyone.

The Pandya family rushes to help Swetha while Suman sees her money missing making her stressed and upset about it.

Gautam calls the police while Swetha wakes up and states that she tried to catch the thief but he hit her and left.

Rishita asks Swetha if she saw the thief and where her brother is.

However, Swetha weaves up another lie and states that Deven left already for some work and that the thief was a bearded person.

Swetha further gives the bag to Suman who cries that two lakhs are still missing.

Rishita taunts that Suman is crying about the money and the person who stole the money.

Just then, the doctor comes and treats Swetha while everyone else leaves the room.

However, Rishita sees the key in the cupboard's lock and says that she is sure she saw Swetha eyeing the money.

At night, Krish comes to Swetha's room and makes her drink the milk while she sees Deven hiding by the window and gets scared.

She tells Krish to leave and goes towards the window when Krish suddenly pulls her by the wrists and turns her towards him.

© Copyright tellybest.com, 2022, 2023. All Rights Reserved. Unauthorized use and/or duplication of any material from tellybest.com without written permission is strictly prohibited.
Cached Saved on: Monday 21st of November 2022 08:38:25 AMCached Disp on: Tuesday 6th of December 2022 12:54:00 PM