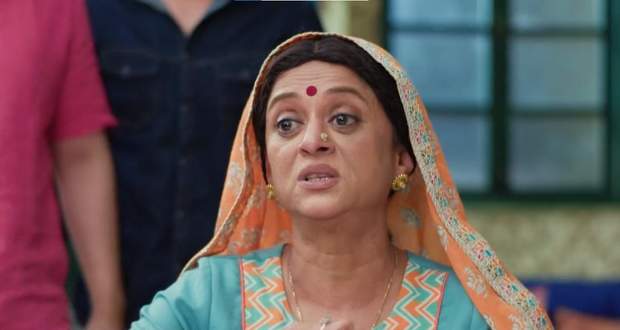 He says everyone uses social media these days and Raavi has become a star, so there is no harm in it.

However, Rishita is angry with Raavi along with Suman and Dhara.

Dhara says how can Raavi show every nook and corner of the house when she could have just made a video of herself.

Suman agrees and asks Shiva to drop from his wife’s dupatta and come to his senses.

Shiva then tells everyone that Raavi has started earning too due to social media but Suman misunderstands him, saying Raavi and Shiva have decided to build a nest of their own, separate from the Pandya Family.

However, Raavi denies this and brings Suman to her room along with everyone and reveals she has earned fifty thousand rupees just because of social media.

Suman gets shocked and thinks Raavi has stolen from her room but Shiva calms her down and says she has earned this all by uploading videos online.

Raavi also shares a gift hamper she got and shows it to everyone.

However, Rishita still does not budge down from her position and asks Raavi not to shoot her or her baby.

Suman then asks Raavi to give her the phone so she can record Raavi apologizing to the Pandya Family.

Gomby tells Raavi that he is with her and understands the importance of social media.

Even Krish tells Raavi he will record videos with her and all goes well in the Pandya Family except for Rishita who is still taunting Raavi for uploading videos.

Meanwhile, Suman worries about Dhara’s growing attachment with Chiku and wishes to do something for her before it is too late.

While making tea, Raavi gets a call from the bank who asks her to do a catalog shoot to promote them for a sum she can decide.

The bank offers Raavi one lakh rupees and she almost pees on the spot.

However, Raavi says she would like to do it for one lakh and fifty thousand rupees and the bank agrees.

In the night, Raavi gets ready and talks to someone secretly on the phone, waking Shiva up.

Shiva then follows Raavi and covers her mouth, making her shocked.