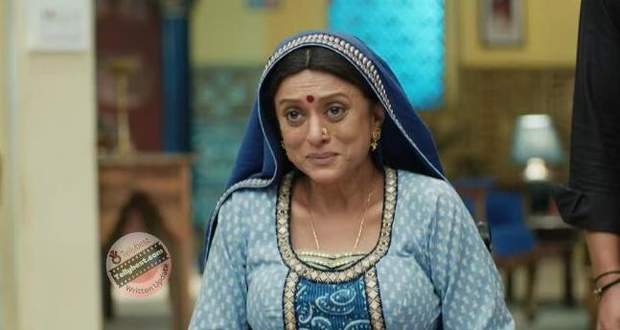 Today's Pandya Store 5th December 2022 episode starts with Shweta blaming Dhara to be manipulative and that she keeps Chiku with her because she is after his money.

She further says that Chiku is equal to money and that is why Dhara tried to save her from dying because Dhara wants to keep the money.

Dhara tries to defend herself but Shweta shuts her down and declares that she alone is enough to handle all of the Pandya house people.

Shweta tells everyone that her leg slipped and she wasn’t going to jump and she went up to pack Chiku’s clothes.

She challenges all the family members that she won’t be thrown out of the house.

Shiva shuts Shweta and tries to call the police but Shweta snatches the mobile and says that she won’t leave without Chiku.

Suman snatches the phone from Shweta and tells Hari to take his daughter away from the Pandya house.

Jhankana tells everyone that Shweta is dead to her to this Shweta says that she is also not interested in being her daughter and starts throwing accusations.

Shweta starts telling the hard truth to everyone starting with Suman, she tells Suman that she wants to be superior to everyone.

Then, Jhankana intervenes and tells Shweta that if she stays the whole family will suffer.

Shweta goes upstairs and starts to pack her bag and drags her suitcase.

She goes to Dhara to take Chiku.

Further, Jhankana tries to stop Shweta but Shweta swats her.

Gautam tries to stop her but she in turn tells Gautam that if he wants a child he should have his own.

She further tells him that no one in the house listens to him and he’s blinded by his love for Dhara.

Shweta questions Krish about why he’s quiet and not defending his brother.

Krish tells her that he knows when to talk and he will when he sends Shweta the divorce papers.

Then, Dev tries to intervene but Shweta shuts him too.

Shweta then moves her attention to Shiva and tells him that he is unable to trust anyone.

However, Shweta’s harsh words leave everyone stubbed and she finally tells that all their problems begin because Dhara took the custodianship.

She snatches Chiku from Dhara and Dhara begs her to leave Chiku.

Seeing his beloved bhabhi like this Krish butts in and tells Dhara to stop.

Shweta further tells everyone that because her parents left her no money she will use Chiku to beg for money.

Shweta drags her suitcase out and Dhara, Gautam, and Dev follow her.

Suman tells Dhara to stop obsessing over Chiku and take care of her house.

Later, Dhara holds Raavi’s hand and walks in but Raavi unlocks her hand from Dhara’s and declares that she will not enter.

© Copyright tellybest.com, 2022, 2023. All Rights Reserved. Unauthorized use and/or duplication of any material from tellybest.com without written permission is strictly prohibited.
Cached Saved on: Wednesday 25th of January 2023 05:28:39 PMCached Disp on: Wednesday 1st of February 2023 08:21:18 PM