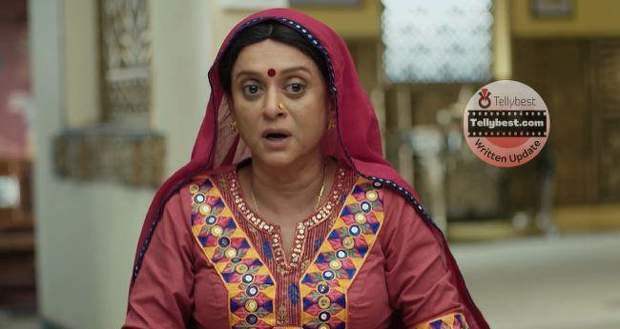 Today's Pandya Store 5th January 2023 episode starts with Dhara looking at Chutki with tears in her eyes through the jail bars.

When Dhara asks Rishita why Chutki is crying, Rishita angrily screams that Dhara should know the reason behind Chutki’s crying as Dhara has surely done something with Chutki.

Rishita further accuses Dhara of wanting to finish Chiku’s competition so he can have a good life but Dhara announces that she wants everyone to live together nothing else.

Meanwhile, at the Pandya store, Krish orders Shweta to take her complaint back grabbing her hand but Shweta asks him if he also wants to go to jail like his precious Dhara.

Shweta even warns Krish that if he does not walk away from the store right now she will complain about Krish of sexual harassment which makes Krish laugh out loud.

Krish then reminds Shweta that he still needs to submit the divorce papers to the court and if he tells the judge that he still wants to stay with his wife Shweta, the court will give them six months to live together.

Krish further adds that Shweta will have to live with the Pandya family under one roof so it will be easy for them to take their revenge on her which scares Shweta.

With a look of defeat on her face, Shweta starts closing the shop along with Krish, and Krish grins.

On the other hand, Shiva takes Raavi out for a panipuri date and orders the panipuri owner to walk away for some time so he can spend some close time with Raavi.

After the owner walks away, Shiva wipes Raavi’s tears who expresses her worry about not getting a job and she even orders Shiva to promise her that he will not do boxing anymore.

Instead of promising, Shiva embraces Raavi in an emotional hug and Raavi smiles.

In the meantime, at the police station, Shweta arrives at the entrance to announce that she is taking her complaint back.

Hearing Shweta’s voice, Rishita turns around in anger and slaps her hard but Shweta does not utter any word.

Meanwhile, during the panipuri date, Shiva starts romantically feeding Raavi the panipuri who expresses how spicy it is and forces Shiva to eat one.

After eating Shiva urges Raavi to bring some water who just grins and Shiva is gasping for breath.

The panipuri stall owner asks Shiva if he can attend to other customers and Shiva walks away with Raavi.

Back in the police station, Shweta signs the papers which release Dhara from jail, but Rishita and Dev walk away with Chutki without looking at Dhara.

While Shweta is walking away, Dhara tells her that she will take the Pandya store back from her very soon but Shweta reminds Dhara about one family member already growing distant from her.

Later, when Raavi and Shiva arrive at the Pandya house, they get shocked to see the hall empty and Rishita, Dev Chutki, Dhara, and Krish enter just then.

While Rishita gives Suman Chutki to calm her down, Shiva asks Dev why he did not inform him about the police station and Dev orders him to check his phone.

However, when Dhara goes to check on Chutki, Rishita pushes her away which shocks everyone and Suman scolds Rishita for behaving rudely.

After standing up, Dhara informs everyone that they need to take Chutki to the hospital and everyone agrees.