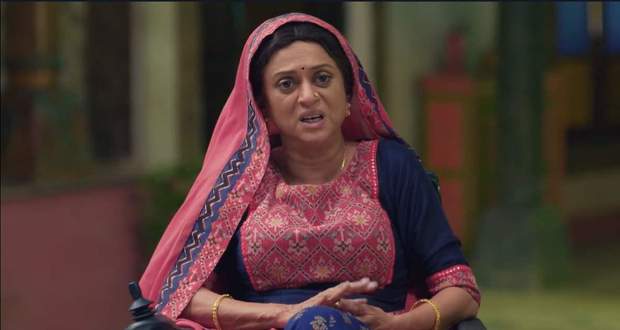 Today's Pandya Store 5th July 2022 episode starts with Dhara clashing with Suman while Suman says she should come with her ladies team after eating something.

Dhara threatens Suman to kill herself if she doesn't obey her decision.

Suman jokes if she will kill herself by cutting herself or drinking poison.

Dhara tries to jump in the well while Gombie stops her and comes back for the sake of his child.

Dhara slips while Gombie holds Dhara by her hand.

Instead of saving her life, Dhara continuously demands Suman to sign the papers or she will leave Gombie's hand.

Further, Suman signs all the papers and Gombie and family pull Dhara out of the well.

Suman hugs Dhara as Gombie hints at her pregnancy and thanks her for the good news.

Dhara says that she was talking about Shiva coming back but not through her and Gombie misunderstood her.

Suman feels disappointed as there is no good news and does not understand why they want to sell this house.

Suman says that they can lease the house instead of selling it and gets teary-eyed.

Prafulla laughs at Shiva and says his game is over along with his family.

Shiva asks what will happen to her as he was hiding at Prafulla's house and be arrested for hiding Shiva.

Prafulla gets scared for her life and cries in fear.

Raavi requests Dhara to invite Shiva to the baby shower.

On the other hand, Prafulla cooks dinner for Shiva and plans on sending him to jail.

Later, Rishita says that she will not do the rituals without Shiva.

© Copyright tellybest.com, 2022, 2023. All Rights Reserved. Unauthorized use and/or duplication of any material from tellybest.com without written permission is strictly prohibited.
Cached Saved on: Wednesday 25th of January 2023 11:57:50 AMCached Disp on: Thursday 9th of February 2023 08:47:39 AM