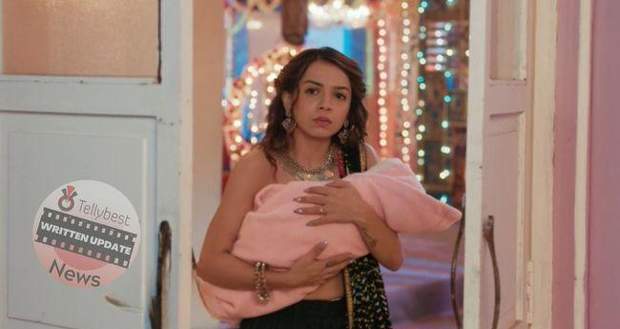 Today's Pandya Store 5th October 2022 episode starts with Swetha going towards the window where Deven is hiding when Krish rushes to her and turns her around.

He tells Swetha that her behavior is very rude and asks again if she wants to marry him.

However, Swetha gets angry and tells Krish that she has already agreed to marry him and he keeps pestering her.

Swetha realizes that if Krish doubts her, the plan will not work and changes her way of acting.

Elsewhere, Rishita keeps trying to convince Dev that Swetha is doubtful by telling him all the patterns.

Meanwhile, Swetha apologizes to Krish and he leaves while Deven threatens Swetha to make sure he gets his money or else she will have to pay for it.

On the other side of the house, Shiva takes his belonging and is leaving when Raavi stops him telling him that they should not involve the family in their matter.

At night, Swetha gets a nightmare that Deven exposed her and she gets arrested which makes her wake up in a sweat.

The next morning, the Pandya family is discussing the expenses while Suman states that she won't give any more money.

Gautam says that he will spend for the remaining wedding while Shiva says that he and Dev will also come with them.

Rishita argues but no one listens to her and she leaves there in anger.

Meanwhile, Raavi tells the family that she is leaving as it's her first day of work in Arnav's firm.

Shiva asks why she didn't tell him and she coldly responds that he didn't ask her.

Later, Swetha goes out and asks her mother for money by doing her emotional drama.

At night, Shiva sees Arnav dropping off Raavi and hugging her which leaves him angry as his car was the one that had splashed him with mud just now.

Afterward, Shiva returns home and gives the money to Dhara which Suman takes stating that she'll keep it in the safe.

Swetha comes there just then with Suman's food and Suman gives her the money to put in the safe.

Rishita speaks up saying that Suman never trusted anyone with the safe before this, not even Dhara.

However, Suman argues that it is because Swetha is from a rich family and the money in the safe is peanuts for her compared to what she is used to having.

Dhara feels hurt by those words and tells Suman that even if she is poor, she and the rest of the family has always respected her money.

© Copyright tellybest.com, 2022, 2023. All Rights Reserved. Unauthorized use and/or duplication of any material from tellybest.com without written permission is strictly prohibited.
Cached Saved on: Monday 21st of November 2022 06:51:52 AMCached Disp on: Friday 9th of December 2022 04:57:07 AM